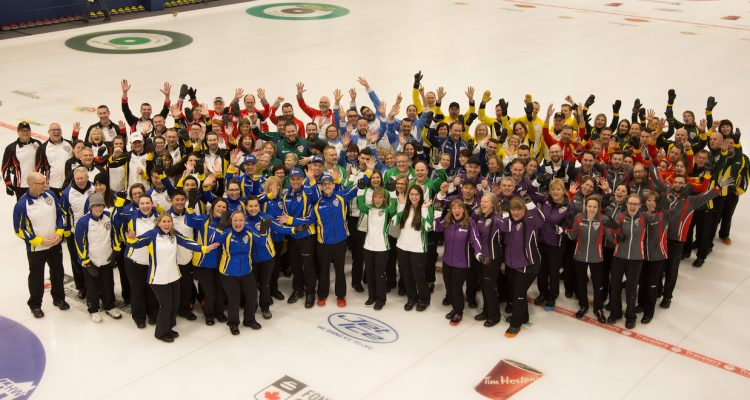 What promises to be an extremely busy week of curling in Leduc, Alta., kicks off on Monday with the opening draws of the 2019 Canadian Curling Club Championships at the Leduc Curling Club.

The 2019 Canadian Curling Club Championships will feature the country’s top men’s and women’s club curling teams, with all 14 of Curling Canada’s Member Associations (10 provinces, three territories and Northern Ontario) represented in both genders.

It will run concurrently with the 2019 Home Hardware Canada Cup, which begins on Wednesday in the Sobeys Arena, which, like the Leduc Curling Club, is under one roof in the Leduc Recreation Centre.

But unlike the players participating in the Home Hardware Canada Cup, competitors in the Canadian Curling Club Championships will not bring Olympic aspirations with them to Leduc.

Which isn’t to say there aren’t players who can play at a very high level; quite the contrary.

On the women’s side, Isabelle Néron is skipping the Quebec team from Chicoutimi; she won the inaugural edition of the Canadian Mixed Doubles Championship in 2013 with partner Robert Desjardins at the same Leduc Curling Club where she’ll be competing next week.

The women’s side also features a pair of past winners at this event — Tracy Andries of Winnipeg has her full Manitoba lineup (vice-skip Crystal Kennedy, second Diane Christensen, lead April Klassen) back that won in 2016 at Kelowna, B.C., while Alberta’s Nanette Dupont (Lethbridge) prevailed with a different lineup in 2010 at Charlottetown.

There’s another past Canadian champion in the field, albeit in a different sport — Alberta men’s skip Dale Goehring of Calgary won the 1997 Canadian Men’s Amateur Golf Championship.

The teams will play a round-robin draw leading to the playoffs Friday and Saturday, Nov. 29 and 30.

The team that raises the most money have the best odds of winning the grand prize: an all-expenses trip for four, including event passes, accommodation and flights, to the 2020 Tim Hortons Brier in Kingston, Ont. You can find more information by CLICKING HERE.

The Canadian Curling Club Championships began in 2009 in Toronto. Since then, Alberta has won the men’s title three times, while B.C., Ontario and Saskatchewan have claimed two titles and Newfoundland/Labrador has one.

On the women’s side, Manitoba leads the way with four championships, followed by Ontario with three, Alberta with two, and Prince Edward Island with a single victory.

Media in the Leduc area are welcome to attend team practice sessions on Monday. CLICK HERE for the complete schedule of practices and games.

The 14 men’s and 14 women’s teams will be split into two seven-team round-robin pools. After a single round-robin, the top three teams in each pool will make the modified double-knockout playoffs, which begin Friday, Nov. 29, at 9 a.m. (all times Mountain).

For draw times, team lineups and other event info, go to: www.curling.ca/2019clubchampionships.