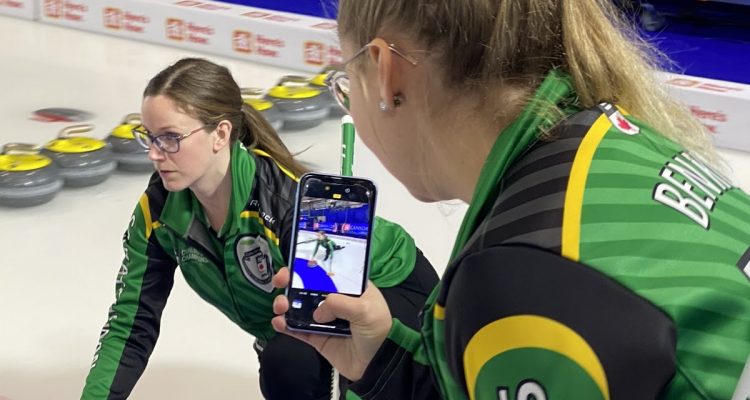 Grassroots on display in Leduc

Club Champion curlers mingle and compete next to Canada’s best.

Calli Benko has been all smiles since landing in Leduc last weekend for the Canadian Curling Club Championships. “I’ve been loving every second of this,” the Saskatchewan lead said on the second day of the championship.

“This is my first green jacket and it’s really awesome and to be able to do this with my mom is incredible,” Benko said of playing front-end with her skip and mother Danette Tracey. Benko is making her debut at a national championship and soaking up every minute of the unique experience at the Leduc Recreation Centre.

The Canadian Curling Club Championship is hosted inside the same facility as the Home Hardware Canada Cup of Curling which begins Wednesday. The Club Championship, hosted by the Leduc Curling Club, plays host to the top 28 club level teams from each provinces, territories and Northern Ontario. The Canada Cup, next door at the Sobey’s Arena and under the same roof, features the top 14 women’s and men’s teams from across the country.

“It’s pretty cool! It’s great we got to throw on the arena ice and see what that would be like for those teams,” Benko said after being given the chance to help break in the Canada Cup ice before the country’s top teams begin pre-event practice on Tuesday.

After their practice in the larger arena, Tracey, Benko, vice-skip Jade Bloor, second Shelby Sidloski and alternate Ashley Green continued their winning run in Leduc with an 8-2 victory over Manitoba and the 2017 Curling Club Championship gold medalists.

The team from the Weyburn Curling Club in Weyburn, SK charged out of the gate in Draw 4 by taking five points in the first end and never looked back. Manitoba skip Tracy Andries, vice-skip Crystal Kennedy, second Diane Christensen and lead April Klassen fell to 1-1 after Draw 4.

Alberta’s men’s team took hosting to a new level at the event in their home province early Tuesday morning. Skip Dale Goehring and his Glencoe Club foursome sat down for breakfast with their opposition before a tight battle with Newfoundland and Labrador in Draw 3 of the championship. Goehring, vice-skip Christopher Armstrong, second Fred Edwards, lead Andrew Brotherhood and coach Paul Webster took Newfoundland & Labrador to an extra end before claiming their second victory and improving to 2-0 in Pool A.

“It may seem kind of odd to eat breakfast with your opposition before the game but that’s just the sort of event this event,” Goehring said after the win.

Goehring had the watchful eye of some of the Canada Cup participants for his final few shots of his round robin game. Matt Dunstone and Braeden Moskowy (Team Dunstone) stopped by the Leduc Curling Club to watch Goehring secure the 5-4 win ahead of their Canada Cup practice.

“That was neat because I used to play with Matt’s dad back in Winnipeg,” Goehring said, “It’s just neat to see the different generations come together and see the different skill levels of curlers all coming altogether here this week.”

After the win Goehring and team made the short walk, smartphones in hand, to the Sobeys Arena to join Denko and her Saskatchewan teammate to record their time on the Canada Cup sheets of ice. “We’re here to enjoy this as fans and as players and that’s what it’s all about,” Goehring added.

Ontario joined Alberta at the top of Men’s Pool A with a 2-0 record while Quebec and Nova Scotia improved to 2-0 in Men’s Pool B play.

In women’s action Quebec joined Saskatchewan at the top of Pool B, both with 2-0 records. Women’s Pool A is led by Ontario and Alberta who both hold 2-0 records after Draw 4.

The 14 men’s and 14 women’s teams are split into two seven-team round-robin pools. After a single round-robin, the top four teams in each pool will make the modified double-knockout playoffs, which begin Friday, Nov. 29, at 9 a.m. (all times Mountain).