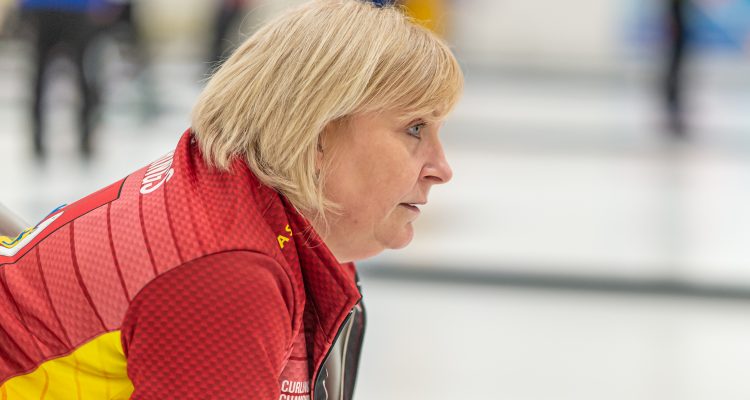 If you walked through the Leduc Curling Club on Thursday morning at the Canadian Curling Club Championship, you would have witnessed first-hand the progress in curling from club teams across northern Canada. Halfway through the morning draw, three of the four teams from the territories that were on the ice had leads over teams from provincial curling powerhouses.

When the final rocks came to rest in Draw 8 at the national championship, it was Nunavut’s women’s representatives who had upset Alberta while the women’s team from the Yukon had rolled to their fourth straight win and had a share of first place at the annual championship. The Men’s representatives from the Yukon are also lurking near the top of their respective pool.

Maintaining pace with other strong northern performances, the Northwest Territories gave the team from Manitoba a run but fell to the bisons by as score of 10-7 in men’s Pool B.

No team from Yukon, Northwest Territories or Nunavut have ever won a national curling title.

“This championship is a great tournament just for that reason. We’ve shown we could all win. It gives a chance to go out here and have some competitive games and be confident knowing we can compete,” Yukon skip Peggy Dorosz said on Thursday.

The Nunavut men’s team got in the win column earlier in the week with a win over a strong team from Saskatchewan (3-2). Thursday it was the women’s turn.

“It feels exceptionally wonderful,” Nunavut skip Denise Hutchings said of the 7-5 victory over host Alberta. Hutchings added that they’ve learned from previous years what can lead to success at this event.  “Practice. We’re practicing a lot more and we like to have our ice installed a little bit earlier. The teams from the south get their ice in September and we were often coming here without having ice back home to practice on.”

It’s a sentiment that is echoed by Dorosz, whose women’s club team entered a recent spiel in Richmond B.C., to prepare. Dorosz, vice-skip Laini Klassen, second Kandice Braga and lead Inge Brown won that event. “That just bumped us up another level of confidence and we know we can keep this up all week because of that win,” Dorosz added.

Nova Scotia remains unbeaten in women’s Pool A play after Draw 10. Skip Tanya Phillips has no prior experience at this event so she sought the advice of last year’s Nova Scotia champion and 2018 Curling Club Championship silver medalist, skip Michelle Williams. “We had a good conversation and I believe supporting one another but increased competition has helped us,” Philips said before improving to 5-0.

Phillips acknowledges, regardless of record or experience, that all teams are equal when they step on the ice at an event that highlights the country’s best club curlers. “We’re just trying to play one rock at a time and one end at a time and we understand that all of these teams can bring their ‘A’ game so we just try to prepare and practice bringing our best.”

Ontario stands alone atop Pool A with a 4-1 record after Draw 10 in men’s action. Quebec has yet to lose and has a 4-0 record with two games to play on Thursday evening, including key battles with Yukon (4-1) and Nova Scotia (4-1).

The 14 men’s and 14 women’s teams are split into two seven-team round-robin pools. After the single round-robin concludes on Thursday, the top four teams in each pool will make the modified double-knockout playoffs, which begin Friday.