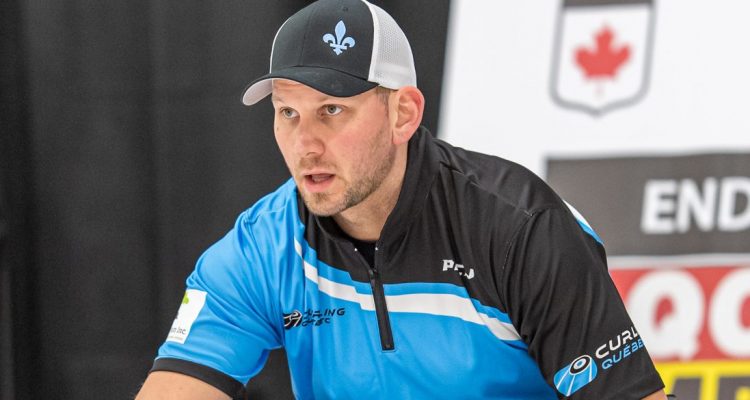 The Quebec men’s champions continue their roll at the Canadian Curling Club Championship, rhyming off four straight wins in the opening three days of action at the Leduc Curling Club. Between Wednesday wins over British Columbia and the Northwest Territories, skip Jasmin Gibeau said it’s going according to plan.

“Obviously we’re happy with our start and this was the goal going in. We wanted to get ourselves into a position where we had a shot at the playoffs,” Gibeau said of his team’s 4-0 record.

“It’s basically a tournament in three stages. We want to first qualify for Friday and then with the double knockout we want to fight through that and see if we can get into the Saturday playoffs,” deWaard said.

The 14 men’s and 14 women’s teams at the national championship are split into two seven-team round-robin pools. After a single round-robin, the top four teams in each pool will make the modified double-knockout playoffs, which begin Friday, Nov. 29, at 9 a.m. (all times Mountain).

The Quebec men’s foursome is leaning on the experience of previous national appearances by Gibeau, deWaard and Lemery to try to get themselves into a playoff spot. Gibeau represented Quebec at the 2006 Canadian Junior Championship and Lemery participated in four Briers (1992, 1993, 1996, 1997). It is, however, the most recent national appearance by deWaard that the team is drawing on learning experiences.

“The planning for this event has been easier now knowing when we can take those breaks with our family, relax a little, when to grab some sleep, see local sights,” said deWaard, who played second for the Quebec team skipped by Jean-Sébastien Roy in Chicoutimi, QC.,

Despite all of their success, the foursome are taking nothing for granted. “You realize as time goes on that when you get a chance to win a provincial that you should take advantage of it,” Gibeau said.

“Winning our Quebec provincials was just as exciting as the mixed provincial win because I got to do this with a lifetime friend in Jasmin. You never know when the next one is going to be,” deWaard added.

The foursome have only been playing together since just last season.

The Quebec men will complete pool play with games against Yukon (2-1) and the other undefeated team in Pool B, Nova Scotia (4-0).

In women’s action, the team from the Chicoutimi Curling Club in Chicoutimi, QC suffered their first loss on Wednesday, falling 10-6 to Manitoba in Draw 7. Skip Isabelle Neron, vice-skip Karine Tremblay, second Edith Cottenoir and lead Veronique Bouchard have a share of first place in Pool B with wins over Yukon, New Brunswick and Northern Ontario.

Neron will be tested in her final two games against Ontario (1-2) and Saskatchewan (3-1).

Meanwhile, the women’s teams from Alberta and Nova Scotia have yet to lose and have 4-0 and 3-0 records respectively after Draw 7.