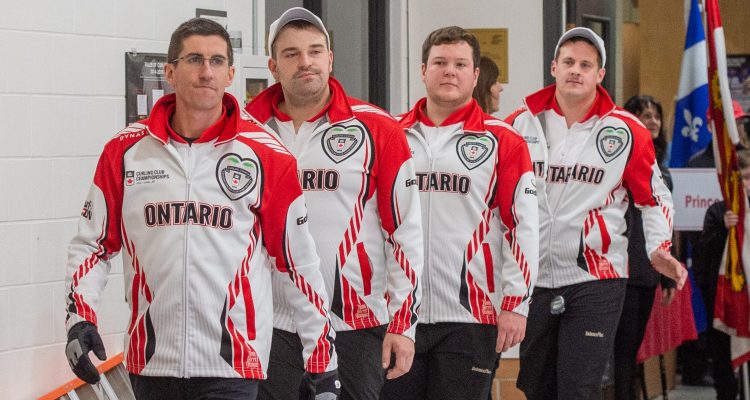 Moffatt gets another chance with Club run

Once an elite curler, Ontario teacher can now compete at nationals:

Paul Moffatt was two wins away from representing Canada at the 2006 Winter Olympic Games, throwing lead rocks on a team full of household curling names. Then Moffatt had to make a choice between his career, his family and the game he loves. That choice has helped land him back at a national championship this week in Leduc, AB.

Moffatt, Morris, Kevin Koe and Marc Kennedy finished third at the 2005 Roar of the Rings and were runners-up at the 2005 Canada Cup of Curling.

One year later, Moffat said he was faced with a choice:

“I had three amazing seasons with John, Kevin and Marc. But I had to decide if the competitive curling lifestyle was for me or if I had other things in store for me. I had a teaching career and a fiancé in Ontario and was really excited to start that part of my life,” Moffatt said.

The Ontario teacher wasn’t sure if he’d ever get a chance to play at a national championship again after his three years playing lead for skip John Morris until playdowns for the Canadian Curling Club Championship rolled around this fall. He along with vice-skip Ben Shane, second John Gabel and lead Kyle Forster were crowned Team Ontario with a 7-1 record earlier this fall giving them a berth to the Canadian championship.

“This is an elite event for us club curlers. I’m really so grateful for this opportunity. It’s something to work toward for any club curler,” Moffatt, 41, said before qualifying for the double-knockout playoffs at the national championship with a 5-1 round robin record.

The Canadian Curling Championships feature the best club curlers from across the country and gives curlers like Moffatt an opportunity to play for hardware at a national championship without having to pause their non-curling careers.

Despite having success with some of Canada’s biggest names in curling, Moffatt had never won a provincial banner.  “This is different but it’s really special for me. To lead these young guys is keeping me young and we’re all at different stages of our curling careers so it’s just been a thrill.”

Kennedy (Team Jacobs), meanwhile, is competing next door this week at the Leduc Recreation Centre in the Home Hardware Canada Cup of Curling and has fond memories of how their former foursome got together.

“When John was moving to Calgary he picked up Kevin and myself but he was keeping it a secret who he was bringing with him. All he would say was his name was ‘Pauldo Capones’,” said Kennedy of what would become Moffatt’s nickname on the team.

“Paul ended up being one of the best teammates I’ve ever had. He really embraced his role at lead and we got all the way to a trials semifinal,” Kennedy added.

“I’m not quite the sweeper I used to be with those guys so I think I’ve found my niche out of necessity. I skipped as a junior but it’s been a long time getting back into the groove of skipping,” said the skip from the Kitchener/Waterloo Granite Club.

Kennedy said he hoped to make some time this week to catch up with Moffatt, see him throw a few rocks or even witness Moffatt perform his other talent.

“He’s one of the best karaoke singers ever. You pick any song and Paul can sing it. Him and Earle (Morris) would get up there and Johnny would get up there but it was always Paul that would be singing and dancing. He’s a beauty.”

Moffatt and his Ontario foursome are through to Saturday’s men’s semifinal at 9 a.m. (all times Mountain). Ontario will face the winner of a Friday evening double-knockout match between Yukon and Saskatchewan.

Northern Ontario’s Ben Mikkelson joined Ontario in securing a spot in the other men’s semifinal with a 6-5 extra-end win over New Brunswick. Jeff Lacey and his team from Saint John, N.B. dropped into an elimination game with Quebec on Friday at 7 p.m.. The winner of that game will play Northern Ontario in the other Saturday morning men’s semifinal.

In the women’s playoffs, it was Alberta and Nova Scotia locking up early spots in the Saturday morning semifinals. Yukon and Saskatchewan will look to stay alive in an elimination game on Friday at 7 p.m. The winner of that game will advance to play Alberta’s Nanette Dupont and her Lethbridge foursome.

Nova Scotia women await their semifinal opponent which will come from the winner of Quebec vs. Ontario, also to be played Friday at 7 p.m.