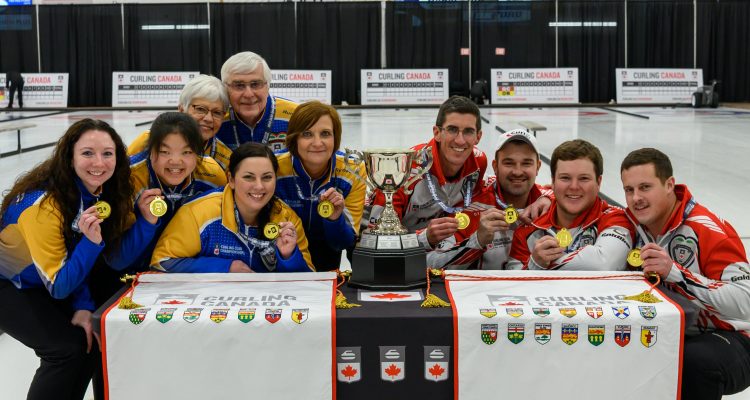 “It feels awesome. This event is our Scotties and our chance to wear the jackets and win a Canadian banner and have our name up on the wall forever. There’s not a lot of people who have done that,” said Dupont, who is the general manager of the Lethbridge Curling Club. This is the second gold for Dupont at this event, her first coming nine years earlier with a different team in Charlottetown, PEI.

The women’s final broke open in the fourth end when Nova Scotia skip Tanya Phillips’ last rock crashed on a guard, leaving Dupont a draw for four points and a 5-2 lead.

Nova Scotia, however, responded with a pair in the fifth end. Dupont added another two points to extend the lead to 7-4 in the sixth end and added two more in the seventh before handshakes.

“I knew we had to keep focused because that was a team that can come back,” Dupont said. Despite her team’s previous appearances at this championship, Dupont says it was still a nerve-racking eight ends. “I might have looked calm but no, I was a bundle of stress and anxiety just trying to keep it together out there.”

The Lethbridge foursome created their club team in 2014 and made previous national appearances in 2017 and 2015, winning silver and bronze respectively.

“There was tons of support here with people come up to cheer us on and traveling up to support us,” Dupont added of the home ice advantage.

“It was our first year here and we’re proud of how we did. There’s always 2021,” Whiteway said after the loss.

In the men’s final Ontario got off to a quick start, scoring three in the opening end. Skip Paul Moffatt and his team from the KW Granite Club in Waterloo, ON took a 6-2 lead into the fourth end break of the gold medal game.  Quebec, however, chipped away at the Ontario lead, narrowing the scoring to a 7-5 advantage for Ontario by the start of the eighth end before being run out of rocks.

“I’m on top of the world right now,” Moffatt said choking back tears. “I feel so good for my teammates because they make me look so good out there and I just wanted to play well for them.”

Moffatt, who spent three seasons curling with John Morris, Kevin Koe and Marc Kennedy, stepped away from elite curling and moved back to Ontario after coming two wins away from representing Canada at the 2006 Olympics.

When asked where this win ranks on his resume the 41-year-old Ontario teacher said, “It’s probably number one. This is amazing.”

“It wasn’t something I even dreamed of because it’s just so hard to win our club and looking back on all the provincials I’ve been to I’d never won one and now it’s turned into a Canadian title,” Moffat added.

The Ontario skip said he’d been texting Morris all throughout the week and the first congratulations message he received after his big win was a message from his former teammate.

Nova Scotia skip Tanya Phillips was chosen as Most Valuable Player in the women’s division by Curling Canada’s onsite umpires. Quebec skip Jasmin Gibeau was chosen as the men’s MVP.

Curlers also competed off the ice to support the Curling Canada Foundation through the annual fundraising challenge to benefit youth curling across Canada. This year’s efforts raised over $21,000 to support the Curling Canada Foundation. There was extra incentive for each team to raise money as every $400 raised earned that team a ballot for a grand prize raffle which included an all-expenses trip for four, including event passes, accommodation and flights, to the 2020 Tim Hortons Brier in Kingston, ON. The Alberta Men’s were the fortuitous foursome who won the grand prize and are on the way to Kingston in March.

The Canadian Curling Club Championship began in 2009 and features the top club curlers from across the country having qualified through their provincial or territorial playdowns. Alberta and Ontario have won the men’s title three times, while B.C. and Saskatchewan have claimed two titles and Newfoundland/Labrador has one.

On the women’s side, Manitoba continues to lead the way with four championships, followed by Alberta and Ontario with three, and Prince Edward Island with a single victory.