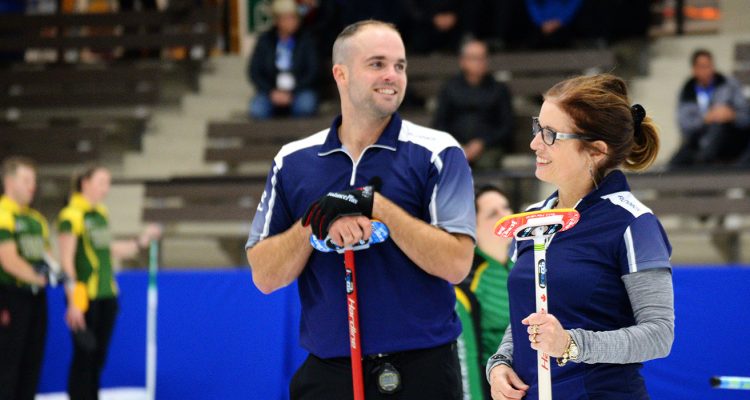 Colleen Jones won her first Canadian mixed title in 1993 with her husband Scott Saunders. Twenty-six years later Jones can once again become a mixed champion with a teammate named Saunders, but this time with her son Luke.

Jones is gunning for her third Canadian Mixed Curling Championship title during the 2020 event in Saguenay, Que. In 1999 she won the title as vice-skip for Paul Flemming, while in 1993 she won her first mixed championship – also the first in Nova Scotia history – with husband Scott. Now she returns to the ice at Foyer des loisirs et de la culture hoping to spark some of the same magic from 1993 with her son.

“The thing about mixed curling is it’s always a bit of an add-on to your season. You’ve missed a lot of family time during the season already, so to be able to connect it back to family is a nice thing. In my case, there’s nobody I’d rather play with than my son,” Jones said.

Jones had always thought of curling competitively with Luke, but needed the circumstances to be right. Saunders returned from university in Chattanooga, Tenn., and then the pair found the right combination of players to claim the provincial mixed title. Last season the mother-son duo decided to keep theme of family prominent in their lineup by recruiting 2008 mixed semifinalist Peter Burgess along with his niece, 2018 Canadian and world junior women’s champion Lindsey Burgess. The team represents the Nova Scotia Curling Association.

“It feels amazing. It’s a dream come true for me and it’s really nice to share the moment and the family experience with the Burgesses’,” Saunders said. “I’m really happy they took the challenge on playing out of the province and to get to here and I’m obviously tremendously proud of mom. I’m glad it’s a family affair on all fronts.”

Saunders had a front-row seat to most of his mother’s successful career – two world women’s championships, six Scotties Tournament of Hearts wins, two Canadian mixed victories and Canadian and world senior women’s gold medals –  and believes this event can be a stepping stone in launching himself further into the game at the national level.

“It’s a chance for me to be a sponge as much as possible and try to play the best I can for them,” he said.

When Jones competes, she plays to win and this year’s Canadian mixed championship is no exception. Nova Scotia is coming off a silver-medal finish last season courtesy of Kendal Thompson and Jones would like to eclipse that finish. A third national mixed title would mean a new world championship opportunity for Jones because of the new world mixed championship added in 2015.

“It would be awesome to be able to win here. It gives me goosebumps just to think about it and that’s the kind of pressure you need to put on yourself,” Jones said. “You don’t want to think about outcome too much, but you have to know that you’re playing for a lot here. To be able to do it with Luke would be even more awesome.”

As of Monday afternoon Nova Scotia has split a pair of games. On Sunday night the team gave up three in the final end to Alberta’s Warren Cross of the Saville Community Sports Centre in Edmonton (1-0) for a 6-5 loss. However, they bounced back on Monday afternoon defeating twin siblings Jamie Koe and Kerry Galusha’s Northwest Territories quartet from the Yellowknife Curling Club (0-2) by score of 7-5 in an extra end.

The championship features 14 teams (10 provinces plus Northern Ontario, Northwest Territories, Nunavut and Yukon) seeded and separated into two pools of seven teams each. The teams first play a round robin within their pool. At the conclusion of the round robin, the top four teams in each pool advance to the Championship Pool, when the teams play the teams from the opposite pool, carrying forward their full win-loss records. Meanwhile, the bottom three teams in each pool will go to the Seeding Pool.