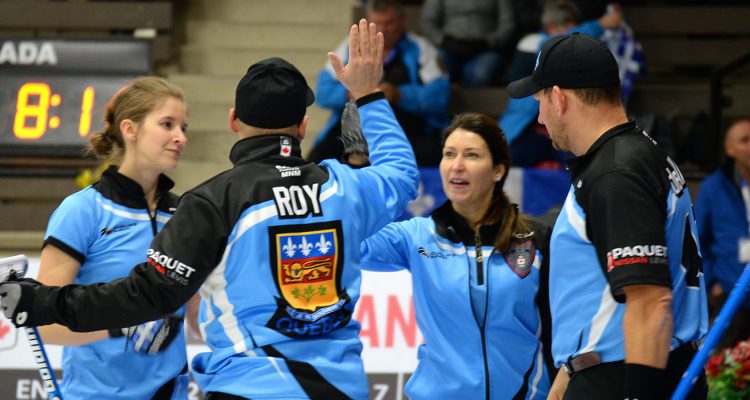 Halfway through the preliminary pool at the 2020 Canadian Mixed Curling Championship and there’s only one way to describe Quebec’s performance so far: dominant.

Quebec’s Jean-Sébastien Roy and his team from the Des Collines/Etchemin Curling Clubs have outscored their competition 30-8 for a perfect 3-0 record at Foyer des loisirs et de la culture in Saguenay, Que.

Combine that win with 10-3 triumph over Prince Edward Island’s Jamie Newson (0-3) on Monday and an 11-3 conquest of Yukon’s Thomas Scoffin (0-3, Whitehorse Curling Club) on Sunday and you’ve got a team that is sitting comfortably in the standings partway through the event.

But Quebec will face its biggest challenge over the next three games. On Tuesday night, Quebec takes on British Columbia’s Cameron de Jong (2-1, Victoria Curling Club), followed by the other two undefeated teams (as of Tuesday afternoon) in Pool B on Wednesday: New Brunswick’s Grant Odishaw (3-0, Curl Moncton) and Manitoba’s Corey Chambers (3-0, Miami Curling Club).

The championship features 14 teams (10 provinces plus Northern Ontario, Northwest Territories, Nunavut and Yukon) seeded and separated into two pools of seven teams each. The teams first play a round robin within their pool. At the conclusion of the round robin, the top four teams in each pool advance to the Championship Pool, when the teams play the teams from the opposite pool, carrying forward their full win-loss records. Meanwhile, the bottom three teams in each pool will go to the Seeding Pool.