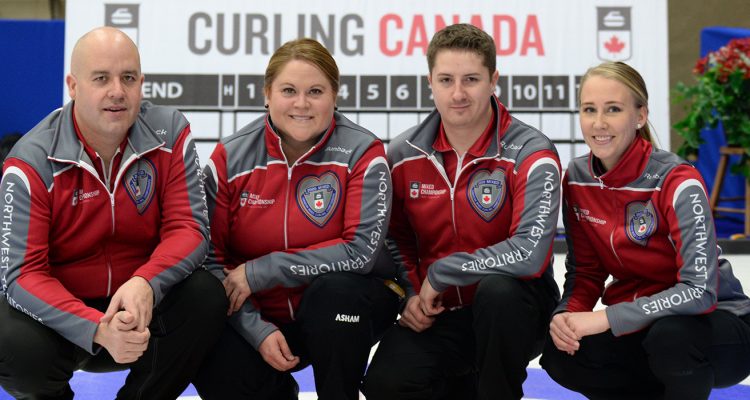 As the saying goes: It’s not how you start, it’s how you finish. That’s the motto the Northwest Territories is following at the 2020 Canadian Mixed Curling Championship.

Twins Jamie Koe, skip, and vice-skip Kerry Galusha celebrated their birthday at the beginning of the event in Saguenay, Que., but things didn’t go the way they hoped at Foyer des loisirs et de la culture. The duo from the Yellowknife Curling Club, joined by second David Aho and lead Megan Koehler, dropped their first two games of the competition but have since won four in a row to finish preliminary pool play with four wins and two losses and finish tied for first in its pool.

But that result was never a guarantee with five of the six teams in Pool A still mathematically having a chance to qualify for one of the four spots available in the Championship Pool on Wednesday night. The Northwest Territories took on pool leaders Newfoundland & Labrador, skipped by Cory Shcuh of the RE/MAX Centre in St. John’s. Koe and the team took a significant lead halfway through the game with four in the fourth and steal of three in the fifth to win to secure an 11-3 win. The loss dropped Newfoundland & Labrador to a 4-2 record as well.

British Columbia’s de Jong, vice-skip Taylor Reese-Hansen, second Alex Horvath, lead Mariah Coulombe and coach Carley Sandwith strung together a steal of three in the third and steal of one in the fourth to take control of the ice and win 9-3.

The win elevated British Columbia’s record to 3-3 and secured the fourth and final spot in the Championship Pool for Pool B contestants. Manitoba’s Chambers fell 9-2 to Quebec and also finished with a 3-3 record, but received the third seed by virtue of its head-to-head record with British Columbia. Quebec topped all of its competition in the pool with a 6-0 record, while New Brunswick finished second with five wins and one loss.

Those teams maintain their records and will play the top four teams from Pool A in the Championship Pool on Thursday and Friday. Meanwhile, the bottom three teams in each pool will go the Seeding Pool.