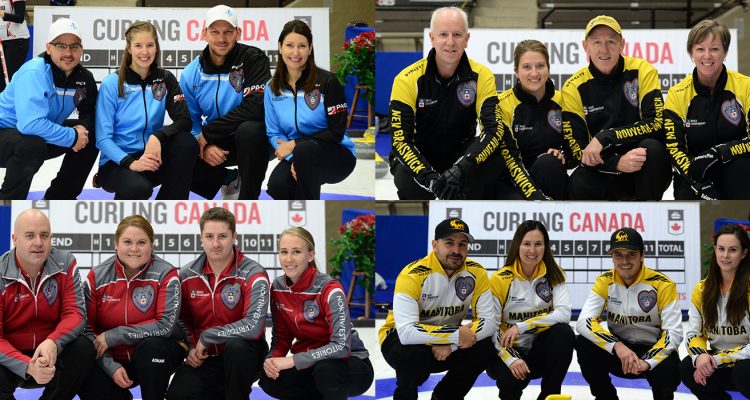 Only four teams remain in contention at the 2020 Canadian Mixed Curling Championship and the hometown crowd in Saguenay, Que., is pleased with the results. Quebec will not only be one of the four teams competing in the semifinals, but it will also be the top-seeded team.

Quebec’s Jean-Sébastien Roy felt a little more at ease stepping onto the ice at Foyer des loisirs et de la culture for the final Championship Pool draw of the event having already qualified for the semifinals on Friday afternoon. Earlier in the day his team from the Des Collines and Etchemin Curling Clubs claimed a 7-0 victory against Newfoundland & Labrador’s Cory Schuh of the RE/MAX Centre in St. John’s.

The team’s talent was also on display for the final draw, stealing away a 7-6 extra-end win against the Northwest Territories and finishing pool play with a perfect 10-0 record. Quebec is aiming to become the first team to win the Canadian mixed title undefeated since Mick Lizmore of Alberta did so in 2016.

New Brunswick’s Grant Odishaw (Curl Moncton) is entering the playoffs on a high note having won both of his games on Friday and finishing the round with a 8-2 record. The team put together a two-ender in the final end against the Northwest Territories for a 4-3 win in the afternoon. New Brunswick played one of its best games of the week in the evening with a dominating 9-3 win against Newfoundland & Labrador.

Odishaw – supported by vice-skip Sylvie Quillian, Marc Lecocq and Jane Boyle – are no strangers to the mixed event. He’s aiming to win his first national mixed title since his last gold-medal finish in 1994. Boyle won the event in 2007 with Odishaw’s brother Terry, while Qullian reached the semifinal in 2012 as a skip.

Jamie Koe of the Northwest Territories, along with twin sister/vice-skip Kerry Galusha, second David Aho and lead Megan Koehler secured the third spot in the playoffs, but not in the fashion they hoped. The team from the Yellowknife Curling Club lost both of its games on Friday to the top two seeded teams, Quebec and New Brunswick.

Koe, Galusha and Koehler are also familiar with the mixed playoffs, having won silver in 2015.

Manitoba’s Corey Chambers had little room for error on Friday if he and his team from the Miami Curling Club wanted to qualify for the semifinals. Heading into the final day of the Championship Pool with a 4-4 record, Manitoba won both of its games to secure a playoff spot. First, it took an early lead against Ontario in the afternoon en route to a 9-5 win. It was followed by a critical 8-6 extra end win against Saskatchewan’s Shawn Meachem (Swift Current Curling Club) where the winner would advance to the playoffs.

Quebec will play Manitoba, while New Brunswick takes on the Northwest Territories in the semifinals on Saturday at 9:30 a.m. (all times ET). The winners advance to the gold-medal game at 2:30 p.m., while the losers will square off in the bronze-medal game at the same time.

Ontario’s Wayne Tuck (5-5, Ilderton Curling Club) finished outside the playoff picture after losing both games on Friday. The team closed out the final draw strongly – stealing single points in the sixth through eighth ends – but it wasn’t enough to overcome a 6-5 loss to British Columbia’s Cameron de Jong (Victoria Curling Club).

Saskatchewan (5-5), British Columbia (5-5) and Newfoundland & Labrador (4-6) were also on the outside looking in at the playoff picture.

Teams competing in the Seeding Pool wrapped up their schedules on Friday. Nunavut’s Wade Kingdon (Iqaluit Curling Club) saved the best for last. The team was winless heading into the final draw, but defeated Yukon’s Thomas Scoffin (Whitehorse Curling Club) 8-7.