This week’s Female Athlete of the Week is Brenda Nicholls of Quebec City. 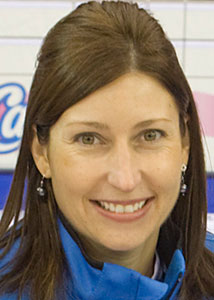 Birthdate: Aug. 9, 1972 Birthplace: Quebec City Hometown: Quebec City Curling Club: Etchemin and Victoria curling clubs Current Team: Team Bélisle Position: Third Delivery: Right Nickname: Bren Getting to Know Brenda Nicholls Brenda Nicholls has put in her time on the bonspiel trail all over Canada, and knows the price that has to be paid to achieve success in the demanding sport of curling. The Quebec City resident has played at the game’s highest level, playing in three Scott/Scotties Tournament of hearts (in three different positions!) and serving an alternate in another, and also made it to the Tim Hortons Road to the Roar Pre-Trials event last November in Prince George, B.C., just falling short of a berth in the big show, the Tim Hortons Roar of the Rings Canadian Curling Trials in Edmonton. Nicholls currently tosses third stones for Eve Belisle’s foursome (rounded out by second Martine Comeau and lead Julie Rainville), a unit that finished 5-6 and out of the playoffs at the 2010 Scotties in Sault Ste. Marie, Ont. In 2007, she was the alternate for Chantal Osborne’s team, which went 4-and-7 in Lethbridge, Alta., and in 2005, she skipped Quebec to a 4-7 log at St. John’s, N.L. She made her Tournament of Hearts debut in 1996 at Thunder Bay, Ont., playing second for Stephanie Marchand, who finished 4-7. Nicholls’ first experience wearing Quebec colours came in 1991 when she skipped her province to a 6-5 record. Quick Hits with Brenda Nicholls Do you have any superstitions? “Yes, when we’re on a roll, I try to wear the same stuff but not things that can smell like socks or underwear; more like ear-rings or rings.” Three people, living or not, whom you would invite to a dinner party. “Bryan Mudryk (TSN SportsCentre and curling commentary guy), Eva Longoria and Oprah.” If you could be a star any other sport, what would it be, and why? “Rowing: I love the glide on the water and it’s an outdoor sport.” If you could change any rule in curling, which one would it be, and why? “Eight-end games instead of 10.” What music do you like to listen to before a game? “Mostly dance music or some Lady Gaga.” Favourite: — Website? “Facebook” — Order from Tim Hortons? “Bagel with cheese with a small half coffee, half hot chocolate.” — Vacation destination? “Australia” — Junk food? “NEVER I’m an athlete!!!!!!!!!! Well, OK, maybe a small Quarter-Pounder with cheese from McDonald’s.” Do you have any pet peeves? “Don’t really like farts.” Three things you always travel with? “Make-up, toothbrush, cellphone.” First thing on your Bucket List? “Do a bike ride for cancer” Favourite pastime between draws at cashspiels? “Watching Grey’s Anatomy and The Young and the Restless with the girls.” One thing most people don’t know about you? “I’m very shy.” What is the biggest misconception about curlers? “People think we are not in good physical shape, but most of us work out and go to the gym at least three times a week.” Your ideal shot to win an Olympic gold medal: “A control hit, any turn, but if possible an open one!”