This week’s junior Athlete of the Week is Breanne Meakin of Winnipeg, Manitoba. 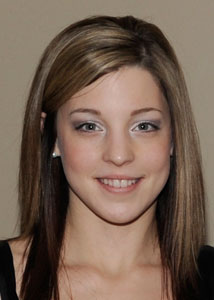 Birthdate: April 16, 1990 Birthplace: Winnipeg, Manitoba Hometown: Winnipeg Curling Club: Fort Rouge CC and Pembina Curling Club Current Team: Team Overton-Clapham (women); Team Meakin (junior) Position: Third/Skip Delivery: Left Nickname: Meaks Getting to Know Breanne Meakin Breanne Meakin is preparing for an extremely busy season. She will be skipping a junior team in her final year eligibility, looking to cap off what has already been a brilliant career in the 20-and-under ranks. She’s won three Manitoba championships, including last season’s, her first as a skip; she posted a 6-6 record at the M and M Meat Shops junior nationals in Sorel-Tracy, Que. She also won a Canadian junior title, tossing second stones for Kaitlyn Lawes in 2009, and went on to help Team Canada (coached by her dad, Rob, a former world men’s champ playing with Kerry Burtnyk) win a silver medal at the world juniors, which served as the test event for the Vancouver Olympic Centre. But Meakin will be playing on a women’s team this season, as well. She was recruited to play third for Cathy Overton-Clapham this season, and she couldn’t ask for anybody better from whom to learn the ropes of top-notch women’s curling. In addition to her curling duties, Meakin will be kept busy away from the rink, too. She’s been accepted into the faculty of human ecology at the University of Manitoba. Quick Hits with Breanne Meakin

Do you have any superstitions? “No, I try to avoid having superstitions because they make me nervous and they are very distracting. (Although, I have a luck charm my grandma gave me that is always attached to my curling bag).”

Three people, living or not, whom you would invite to a dinner party. “Sandra Schmirler, because she was an inspiration to curlers; Oprah Winfrey, because I want to see what she’s really like in person; and Russell Peters, because he is hilarious and I love to laugh.” If you could be a star any other sport, what would it be, and why? “If I could be a star in any other sport I would choose soccer, because I used to play and was never very good at it.” If you could change any rule in curling, which one would it be, and why? “Allow two people from the same team to sweep behind the tee-line; for example, on a bumper-weight hit-and-roll, allowing you to sweep your roll and sweep their rock out.” What music do you like to listen to before a game? “Last year I didn’t listen to music in my warm-up, but I have listened to bands like AC/DC, Billy Talent and Hedley.” Favourite: — Website? “www.youtube.com” — Order from Tim Hortons? “I used to work at Timmies. Citrus green iced tea, and if I’m hungry, a chicken caesar wrap snacker.” — Vacation destination? “The Bahamas.” — Junk food? “Pop or chips.” Do you have any pet peeves? “Drama people create between themselves, but they will not talk face to face. And people who are glued to their phone texting while you’re trying to have a conversation with them. Frustrating!” Three things you always travel with? “My favourite pair of jeans, hand lotion, and sunglasses (I usually buy a new cheap pair wherever I go).” First thing on your Bucket List? “To explore Europe.” Favourite pastime between draws at cashspiels? “I hardly watch TV, so I would say having a short nap or going for a walk. It’s OK if my roommate wants to watch tv while I nap, because I can sleep through almost anything.” One thing most people don’t know about you? “I just bought my first car!” What is the biggest misconception about curlers? “That they are out of shape.” Your ideal shot to win an Olympic gold medal: “Draw to the four-foot.”