Fit to Curl: Out of the gates – the first event of the season

Whether it’s a World Curling Tour cash spiel or a fun weekender in your club, playing those first games of the new curling season can be a bit of a jolt. 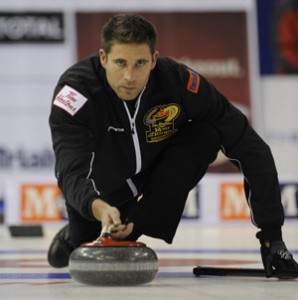 John Morris delivers a stone at the 2009 Tim Hortons Roar of the Rings in Edmonton, Alberta. (Photo: CCA/Michael Burns Photography)

My teammates and I started the new campaign on September 16th at The Shoot-Out in Edmonton at the Saville Centre, an event we haven’t played in the past. It wasn’t our best start to a season — we lost in the Quarter-Finals to a sharp Rob Schlender rink. Admittedly, the first event is a bit of a crap shoot for everyone — some players come out firing on all cylinders while others don’t have it dialed in yet — but we’re trying to win whenever we’re on the ice. We weren’t way off at the Shoot-Out but when you’re playing solid teams, it doesn’t take much to wind up with losses. Our decision to play in The Shoot-Out was a last-minute one, spurred by our need to accumulate points in order to gain a direct entry into the Alberta Provincials. Right now, we’re on the outside looking in and two of our best opportunities to accumulate CTRS points — the Canada Cup and the Swiss Chalet National — occur after the December 1st date that Alberta has established as a cutoff for determining which team has the most points and qualifies directly into the Boston Pizza Cup. As a result of all that, we decided to make the event at the Saville Centre a part of our schedule. Taking nothing away from the Schlender rink — Rob is a great shooter and had an incredible game in the QF — this event demonstrated the importance of solid preparation. Physically, after a demanding off-season training program, I am as ready as I’ve ever been to start a season. But what we missed was the two-week training camp we like to have before our first competition. There is no substitute for that kind of prep — intense practice that gets the rust off the game — and not having it prior to The Shoot-Out was something my teammates and I definitely missed. Instead of percentages in the 85-90 range, we were around 75-80. If our start this season did anything for us, it reinforced the value of the preparation we usually do. Our next World Curling Tour event is the West Coast Curling Classic in New Westminster, B.C. To get ready, I’ll be in Edmonton this week to train for about six hours each day — on the ice with my teammates and Coach Owchar, in the gym, probably even in the yoga studio to work on my ridiculously-bad-but-improving flexibility. I’m looking forward to playing in New West, one of my favourite events, with the focused preparation my teammates and I like to have. One thing I do know is that my current commitment to fitness means I start playing in that first event feeling far better than I did several years ago. So even though I wasn’t happy with the results at the Saville Centre, I know that because of my summer workouts I can get to mid-season form quickly. I can practice hard over the next two weeks because I’m not “playing my way into shape” — my body doesn’t need a bunch of time to recover after that first weekend of competition. In the end, whether your first bonspiel was full of wins or losses, it should provide some indication of areas you need to focus on during practice. Or it might just remind you that more practice is something you need.