This week’s male Athlete of the Week is Jim Cotter of Vernon, British Columbia. 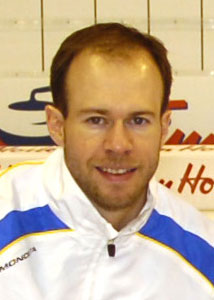 Birthdate: Oct. 15, 1974 Birthplace: Kamloops, B.C. Hometown: Vernon, B.C. Curling Club: Vernon Curling Club Current Team: Team Ursel Position: Third, throwing fourth stones Delivery: Right Getting to Know Jim Cotter Family support was never a problem when Jim Cotter was growing up in Kamloops. In the winter, his parents Rick and Pat were seemingly always at the curling rink, either as competitors or helping young Jim hone his own skills. In the summer, young Jim was turning into quite a baseball player, and you could always see Rick and Pat in the stands, often keeping score for Jim’s team. So it was just a matter of time before all that parental support translated into success for the smooth-throwing Cotter. Baseball was fun, but curling was his passion, and his constant practice soon paid off as Cotter won three straight B.C. high school championships at NorKam secondary, and also won the provincial junior men’s crown in 1990 (earning Kamloops Team of the Year honours) and 1995 (when he was named Kamloops Male Athlete of the Year). Cotter has enjoyed similar success on the men’s level as he’s been a major player on the Asham World Curling Tour, teaming up initially with legendary Pat Ryan and then, in recent years, with former world junior champ Bob Ursel, throwing skip rocks while Ursel calls the game. The stint with Ryan produced a fourth-place finish at the 2005 Canadian Curling Trials in Halifax, and then with Ursel, Cotter captured his first Tim Hortons Brier Purple Heart in 2008 at Winnipeg, where the team lost in the Page playoff three-four game to Ontario’s Glenn Howard. The team also captured a gold medal at the prestigious Karuizawa International Bonspiel in Japan in 2009, and also went to the 2009 Road to the Roar Pre-Trials event in Prince George, B.C. In addition to honing his own game, Cotter is doing his part to build the sport for the next generation as he volunteers at his home club in Vernon, helping to organize the junior league. Quick Hits with Jim Cotter Do you have any superstitions? “I use to have a lot of superstitions but once I stopped playing baseball those seemed to go away.” Three people, living or not, whom you would invite to a dinner party. “Babe Ruth, Joe DiMaggio and Marilyn Monroe.” If you could be a star any other sport, what would it be, and why? “Baseball, because it was a game I played for 20 years. I always dreamed of being a major leaguer.” If you could change any rule in curling, which one would it be, and why? “Flip of the coin for hammer, which is already being taken over by draw to the button in many events.” What music do you like to listen to before a game? “Good ol’ rock ’n’ roll.” Favourite: — Website? “???” — Order from Tim Hortons? “Double-double.” — Vacation destination? Anywhere hot.” — Junk food? “Chips.” Do you have any pet peeves? “Having to work the day after a curling event; and somebody driving under the speed limit and you can’t get past them.” Three things you always travel with? “Wallet, clothes and toothbrush.” “Favourite pastime between draws at cashspiels? “Easily, it’s napping, or watching some sort of professional sports playoffs if they’re on.” One thing most people don’t know about you? “We have three kids.” What is the biggest misconception about curlers? “How difficult it is to actually slide (if they’ve never tried before).” Your ideal shot to win an Olympic gold medal: “Draw to the button.”