This week’s male Athlete of the Week is Ryan Fry of Winnipeg, Manitoba and St. John’s, Newfoundland. 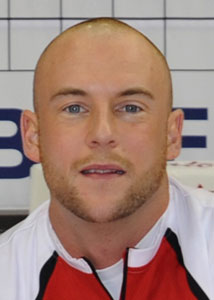 Birthdate: July 25, 1978 Birthplace: Winnipeg Hometown: Winnipeg, St. John’s Curling Club: Bally Haly Golf and Curling Club Current Team: Team Gushue Position: Second/Lead Delivery: Right Nickname: Small Fry Getting to know Ryan Fry Ryan Fry’s decision to take his Manitoba tuck to the Rock has worked out quite nicely, thanks very much. The two-time Manitoba junior men’s champ, and son of 1979 Brier champ Barry Fry, left his home province prior to the 2008-09 curling season to join Brad Gushue’s powerhouse team curling out of St. John’s, NL. That move has produced back-to-back Purple Hearts for Fry, who throws second stones, as well as a victory last season at the Asham World Curling Tour’s Swiss Chalet Grand Slam National in Guelph, Ont. Fry isn’t the tallest curler on the circuit, but he packs a punch with his hitting game from the second spot, and has become a crucial weapon in the middle of the Team Gushue lineup. The Newfoundland/Labrador champs have reached the playoffs with an 8-3 record at the past two Tim Hortons Briers, losing in the Page playoff three-four games both times — to Manitoba’s Jeff Stoughton (with whom Fry played at the 2007 Brier in Hamilton, losing in the semifinal to eventual champ Glenn Howard of Ontario) in 2009 in Calgary, and then last season in Halifax to eventual Brier and world champion Kevin Koe of Alberta. This season, his role is in flux. At some events, when Randy Ferbey is with the team, Fry is slotting in at the lead spot, but when Gushue enters the playdowns, Ferbey won’t be eligible, and Fry will be back at second. Quick Hits with Ryan Fry Do you have any superstitions? “My superstition is not to lose; it’s bad luck.” If you could be a star any other sport, what would it be, and why? “I would want to be a pro curler, in a time when you could make any other pro athlete’s salary.” If you could change any rule in curling, which one would it be, and why? “A tie game after eight or 10 ends would result in two extra ends being played, each team getting the hammer in one.” What music do you like to listen to before a game? “Anything, ranging from Eminem to Journey.” Favourite: — Website? “That could get me into trouble.” — Order from Tim Hortons? “Everything is amazing; not only is Tim Hortons a quality supplier of baked goods, sandwiches and that unmistakable great tasting coffee but it just happens to be one of the greatest sponsors in professional sports.” — Vacation destination? “Anywhere hot, with girls in bikinis and a hot-tub bar.” — Junk food? “I’m a picture of health . . .” Do you have any pet peeves? “Way too many to list, but losing is up there.” Three things you always travel with? “Computer, phone and wallet.” First thing on your Bucket List? “Win the Brier.” Favourite pastime between draws at cashspiels? “Eating, napping and the gym.” One thing most people don’t know about you? “I curl commando. Kidding. I’m an open book.” What is the biggest misconception about curlers? “We are all out of shape. I think you will see a push in the next four years showing all the training done by the top teams.” Your ideal shot to win an Olympic gold medal: “Sweeping a draw to the button.”