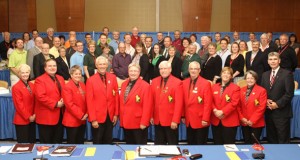 “This year’s National Curling Congress saw several changes which we believe helped enhance the overall experience for all attending delegates. The spirit of the membership was very positive and truly embodied the collaborative efforts on behalf of the CCA and all its Member Associations,” explained Greg Stremlaw, Chief Executive Officer of the Canadian Curling Association. “I would like to sincerely thank the NCC Planning Committee for their work related to this event and the introduction of a curling summit which produced comprehensive education and dialogue for the benefit of our sport.” The CCA is pleased to report that, for a fourth consecutive year, it will finish the fiscal year in the black with a continued positive financial outlook. The Association showed a financial surplus of $640,727 for the year 2010 – 2011. The newly created Curling Assistance Program (CAP) received another significant boost with the CCA Board of Governors approving $300,000 to be allocated into CAP for this coming year. This funding program is a CCA-designed fund that targets projects designed to grow the sport of curling at the community level or to assist capital projects critical to the operation and health of the CCA’s membership. The new 2011-2012 Curling Assistance Program and application details for the CCA’s affiliated curling centres will be available this fall. An updated Business Plan and Organizational Strategy for the Association was also presented and will be available on the CCA’s website next month. This year’s National Curling Congress included a type of ‘curling summit’ that was scheduled between the standard business sessions and AGM. This format allowed for some excellent information on television and social media, coaching and instruction and how to grow the sport of curling in our communities. Curling club professionals from multiple affiliated curling centres across the country helped lead this summit and the round table discussions on these topics. Updates on high performance, information technology, development, championships and national marketing strategies were also provided by the CCA. 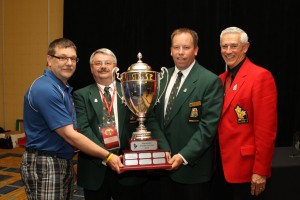 The Dominion MA Cup, presented by TSN was awarded to Alberta and Saskatchewan. (Photo: Neil Valois)

This past year the CCA created a new provincial/territorial ranking system to measure Member Association (MA) performances at all of the CCA-operated and sanctioned national curling championships beginning in the 2010-2011 season. This year’s Dominion Member Association Cup, presented by TSN, was awarded to co-champions – Saskatchewan and Alberta. On a related note, this was also the inaugural year of the CCA’s Governors’ Cup which is awarded to the Member Association making the biggest year-to-year improvement on an average point basis for the above events. This year’s Governors’ Cup was awarded to New Brunswick. A number of motions were passed at the CCA Annual General Meeting, including: – The Equitable Opportunity to Access Canadian Championships approved at last year’s AGM for application at the 2012 Canadian Mixed and Canadian Senior Curling Championships has been expanded to the M&M Meat Shops Canadian Junior Men’s and Women’s Curling Championships starting in 2013. 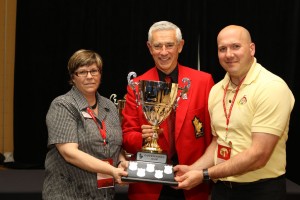 – A new Residency Policy to Compete at National Curling Championships was developed and subsequently approved by the Provincial/Territorial Members. – A policy on Transgender Participation for all Canadian Curling Championships to align with the IOC’s current policy was brought forward and received acceptance with the exception of the 2-year wait period being amended to 1-year. – In 2010, the CCA adjusted its game timing structure to remove coaching time outs from the time allocation at national events. Following a season of implementation, it was decided to make a change to 71 minutes of game playing time (from 73 minutes). During the course of a 10-end game, each team will be able to call two, 90-second time outs (including travel time), during which time the coach will be able to access their teams. The change of game playing time will be applicable at the Mixed, Seniors, Men’s and Women’s National Championships as well as the other televised Season of Champions events with the exception of World Championships operated in Canada. – The Member Association Code of Conduct approved at the 2010 AGM was updated to include a process for handling violations and appeals. Having completed their tenures, CCA Chair Jack Bowman of Victoria, British Columbia and Governor Georgina Granchelli of Sydney, Nova Scotia retired from the CCA Board. Bob Osborne of St. John’s, Newfoundland & Labrador and Cindy Maddock of Morden, Manitoba were elected by the Member Association delegates to serve on the CCA Board of Governors for a 5-year term. Laura Lochanski of Alberta was elected Chair and Jim Campbell of Ontario, Vice-Chair of the CCA Board of Governors for 2011-2012. The next Canadian Curling Association Annual General Meeting will be held on Saturday, June 16, 2012 in Ottawa.