Brier “Paint the Town” Crew Revved Up in Saskatoon 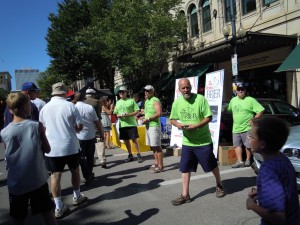 The 29th edition of the event – the largest of its kind in western Canada – featured more than 900 classic cars, motorcycles and trucks on display over a span of 12 city blocks.  The Brier ambassadors were there to distribute brochures and promotional items in the drive to keep the momentum building for the upcoming Canadian men’s curling championship. The previous week they were spreading the word around the town during the Saskatoon Folkfest, August 18th to 20th.  The annual cultural celebration was staged at locations throughout the city with pavilions hosted by 17 different ethnic organizations. Each one presented an array of traditional food, drink, music and dance – a fitting warm-up for all the fun coming up at the Patch when the Tim Hortons Brier gets underway at the Credit Union Centre March 3 – 11. “You Gotta Be There” to experience the excitement of live championship curling along with the party of a lifetime!  Get your tickets now just by clicking here.