Volunteers Drum Up Interest for the WFG Continental Cup of Curling

The promotions team for the 2012 World Financial Group Continental Cup of Curling hit the road to New Westminster over the Thanksgiving weekend for the 12th annual Westcoast Curling Classic hosted by the Royal City Curling Club. 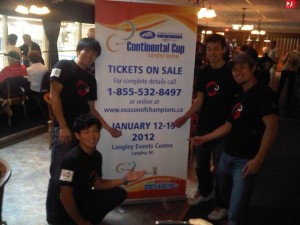 The volunteers were welcomed by a captive crowd of curling fans and competitors, circulating promotional material for the unique international challenge. Team North America takes on Team World January 12 – 15 in the Langley Events Centre for the eighth edition of the Continental Cup. Edmonton’s Kevin Martin defended his 2010 title with a win over Winnipeg’s Mike McEwen in the final of this year’s Westcoast Curling Classic. The 24-team field had a distinct international flair of its own, drawing entries from Russia, Finland, Japan, Chinese Taipei and the U.S.A. “You Gotta Be There” when the best curlers in the world travel to B.C.’s lower mainland for the 2012 World Financial Group Continental Cup of Curling.  The best seats in the house are on sale now – get yours by clicking here.