Around the House: A curling “House of Champions” celebrates 100 years in St. John’s

It all started, so the story goes, when a young man named James Baird (later to be the Hon. J. Baird, member of the Legislative Council) cleared space on Quidi Vidi Lake to play the first curling game ever seen in St. John’s. The year was 1844. Yes, curling has been alive and well in St. John’s for over 100 years, and they’ve got the antique rocks, old photos and championship banners – not to mention an Olympic gold medal – to prove it.

The men of the club (Photo courtesy of B. Osborne) 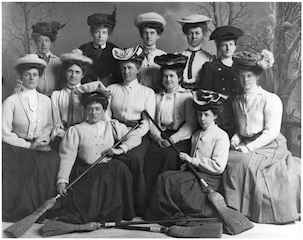 The ladies took to the ice in the early years (Photo courtesy B. Osborne)

What started as the Terra Nova, Arctic and Mic Mac curling clubs eventually joined forces in 1910 under the banner of the St. John’s Curling Club. They found playing time on the curling ice attached to skating rinks around town, dodged financial troubles, renovated or built various facilities, and finally established a permanent home in 1976 in what is now known as the Remax Centre. So when the club’s centennial year in 2010 rolled around, everyone decided it was time to throw a year-long party to celebrate past, current and future heroes. And St. John’s curlers have a lot of heroes to celebrate. As reported in the colourful and comprehensive booklet put together by a hardworking Centennial Committee, over 167 winning teams have gone on, as members of the St. John’s (Nfld) Curling Association (as the club is known officially), to represent Newfoundland and Labrador at national championships. 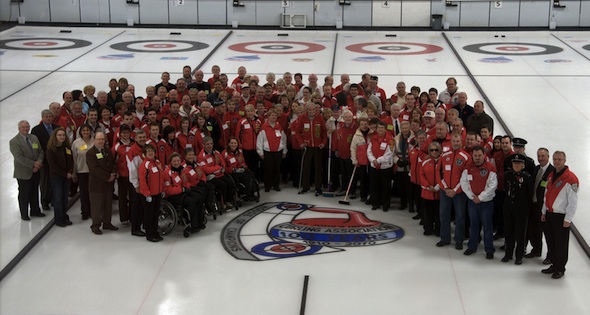 Some of those heroes include Brad Gushue’s Team Canada, whose Olympic final gold medal game shut down the province in 2006. And Cathy Cunningham, who has represented the club and province at more national championships (Scotties and Mixed) than any other member, past or present. And of course, there’s Jack MacDuff and his team, who achieved the province’s first, very memorable 1976 Brier victory, against all odds. No wonder “House of Champions” was the slogan for the centennial year. But the focus wasn’t just on the curlers wearing their red and white team jackets on competitive ice across the country or the world.  Club president Bob Osborne made that very clear at the anniversary season’s opening ceremonies on November 11, 2010. “You are a champion to just lace up a pair of shoes and to enjoy the game whether you win or lose,” Osborne said. “You are a champion if you walked through the doors to help at a function, whether you know it or not.” In other words, the St. John’s Curling Club was committed to a year of celebrating all its winners, whether they wear championship team jackets and crests or not. “There’s only one thing which can keep a curling club successful for 100 years,” wrote St. John’s mayor Dennis O’Keefe in his letter of congratulation to the club. “And it’s not ice.” 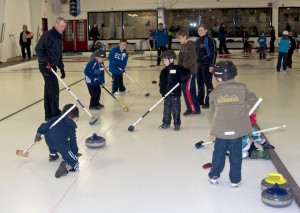 Like any club, St. John’s thrives because of the people who walk through its doors, roll up their sleeves and do any job required, on the ice or off. That includes people like Pam Osborne, who not only has represented the province – twice! – at the Dominion Curling Club Championships, but also took on the task of producing the commemorative anniversay book, over 100 pages of history, memories and photos. Or Gary Maddigan, who runs the current family curling program introduced during the 1972-73 season by members Doug and Daphne Wyatt. It was here that many of the club’s young champions got their start on the ice. The anniversary book includes photos of young curlers, past and present, such as a tiny, helmeted Jessica Cunningham (daughter of Cathy), who “grew up” to be the 2010 and 2011 Provincial Junior Champion. Or Frank “Spike” Noseworthy, the longest-active member of the club, whose list of volunteer contributions to the growth and well-being of the organization is as long, if not longer, than his accomplishments on the ice. Inducted into the prestigious Governor General’s Curling Club in 1987, “Spike” continued his off-ice contribution by serving – where else? – on the Centennial Committee. 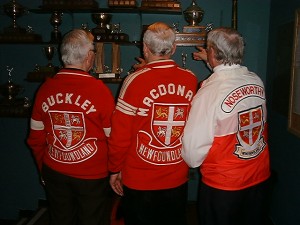 The list, of course, is endless. A glance through the pages of the commemorative book reveals the faces and names of countless members who, over the past 100 years, have contributed, in some way, to the history of this proud, thriving club, and who leapt into the anniversary celebrations with gusto, hauling out old photos, attending events packed through the season, and lending a hand when needed. “I think overall the club benefited greatly from the celebration year,” says Bob Osborne, looking back. “And as I was the President of the Club during the celebration I have to say that it would not have been near the success without the Centennial committee. Everything went off without a hitch and although they were all volunteers, it was like I had a group of seasoned professionals working the whole year on the celebration.” On the ice and off, champions abound at the St. John’s Curling Club. “Stick around,” said Osborne in his foreword to the 100th Anniversary book. “I would love to see everyone still playing in another 100 years.