Thomas Scoffin, of Whitehorse, Yukon, made history the first time he stepped onto the national curling scene in 2007 at the age of 12. 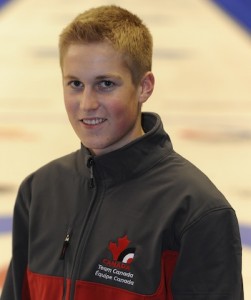 That year, Scoffin became the youngest player ever to skip a team at the M&M Meat Shops Canadian Junior Curling Championships, and he’s been competing provincially and nationally ever since. Apart from skipping the Yukon champions at the Canadian junior national event every year since then, he’s also won two silver medals (2006, 2008) and one gold medal (2010) at the Arctic Winter Games. Scoffin also skipped Team Yukon at the 2007 and 2011 Canada Winter Games, drawing the attention of national curling coaches who selected him to call the shots for Team Canada at the 2012 Youth Olympic Games taking place in Innsbruck, Austria, this February. Third Corryn Brown, second Derek Oryniak, and lead Emily Gray round out the Canadian squad. Putting his experience to work for others, Scoffin volunteers as a coach with the provincial Special Olympics curling team that will represent Yukon at the 2012 Special Olympics Canada Winter Games. Outside of curling, he claims to be a “washed up soccer player” who competed in two national championships for Team Yukon “back in the day.” But his many on-ice accomplishments point to a young curler who knows exactly which game he was meant to focus on: “My parents introduced me to the sport,” he says, “and I’ve loved it ever since.” Birthplace:  Sudbury, Ontario Hometown:  Whitehorse Curling Club:  Whitehorse Curling Club Current Team:  2012 Youth Olympic team, also skip of Team Scoffin Position:  Skip Delivery:  Right Quick Hits with Thomas Scoffin Do you have any superstitions? “If it’s working, don’t change it. Riding shotgun to the rink never hurts either.” If you could be a star in any other sport, what would it be, and why? “Golf maybe. It has its similarities with curling and there might be a bit of money involved…” If you could change any rule in curling, which one would it be, and why? “I’m not sure; it seems like the rules are changing enough as it is! I’m a believer in 10-end games though, hoping they stick around.” What music do you like to listen to before a game? “Usually some low key music, and throw in some Eminem.” Favourite: … Website?  “Twitter” … Order from Tim Hortons?  “Turkey bacon club” … Vacation destination?  “Somewhere warm! Golfing in Phoenix maybe. These Yukon winters are getting old.” … Junk food?  “Skittles” Do you have any pet peeves? “Unnecessary screaming from skips maybe… just throwing that out there.” Three things you always travel with? “iPod/phone, wallet, clothes and I’m good. Not a picky traveller.” First thing on your Bucket List? “Haven’t thought about it yet. Just goin’ with the flow.” Favourite pastime between draws? “Grabbing some food and relaxing before the next one.” What is the biggest misconception about curlers? “Most are a lot more athletic than people give them credit for.” Your ideal shot to win an Olympic gold medal: “I’ll take any shot to win the gold. That’s what practice is for, right?”