The team has wrapped up another awesome, busy weekend! The gang was together again in the nation’s capital, Ottawa, Ont., for the JSI OVCA Junior Superspiel. 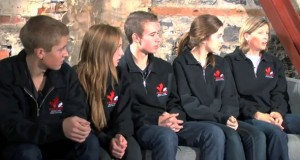 While it was a tough, long weekend, we managed to pull out enough wins to get to the consolation final and really put the pressure on in an extra end to capture the win. Everyone arrived in Ottawa on Thursday. Derek and I got there a little bit earlier than Corryn and Thomas, so we hit the ice for about an hour. Once everyone was together, we headed over for a video shoot with Glenn van Gulik from the Canadian Curling Association. The team was then interviewed by Brian Chick, together and individually. After that was over, it was almost like Christmas. We were handed a huge box full of Balance Plus gear! We all got pants, gloves, shoes, and brooms. Big thanks to Balance Plus for all the goodies! Canada’s Youth Olympic Curling Team Interview httpvh://www.youtube.com/watch?v=eJgM-c5_p4g We played our first game early Friday morning at the Navy Curling Club. During our first game, CCA High Performance Director Gerry Peckham came to watch. We even had Brennan Schnell from the CCA take some awesome pictures of us on the ice. Unfortunately we couldn’t pull out the win, but the game came down to the last shot and was well played. 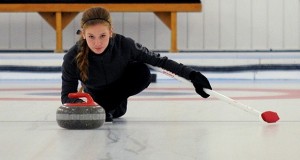 After the game Gerry took us to lunch and gave us some great insights which helped us all weekend. When we got back to the club to play our next game, my aunt and two cousins from Belleville, Ont., were there waiting for me. It was great to see some of the family again, and I was really glad they came to watch me curl. My own family even drove up all the way from P.E.I. to watch me and the team. We played two more games on Friday, one at the Navy and one at the Granite Curling Club, both coming out with a loss. On Saturday it was ‘do or die’. We had an 0-3 record and another loss would mean we were out for the weekend. We all got to sleep in a bit, since we didn’t play til the early afternoon, so everyone was well rested and ready to go. Once we got to the club and warmed up, we were taken out on the ice a little bit earlier to get some, well, interesting photos taken! Steve Au from Ottawa got us to pose inside a hoola hoop, making us look in different directions. The whole team was getting a kick out of it, but after the game Steve showed us the final picture. He had edited it so it looked as if we were each inside one of the Olympic rings, with TEAM CANADA across the front. WOW! It looked great! Sports psychologist Penny Wethner came to watch our game as well on Saturday and met with us after the game, giving us some great pointers to take with us into Sunday. We finally pulled out the win against one of my home (P.E.I.) teams, Sarah Fullerton, in a close game. This meant we played again the next day, still with the pressure of ‘do or die’. We then headed back to the hotel and got ready for the banquet. And of course, being as important as we are (LOL), we had to arrive ‘fashionably late’. We arrived and had an awesome meal, put on by the Granite Curling Club. We talked with some of the other teams, and Corryn and Derek even got to test their bilingual skills when we sat beside the Quebec girls team. I stuck to my amazing English skills and talked to some of the boys from the American team. The banquet only lasted about an hour, so we had lots of free time later that night. Unfortunately I couldn’t convince the rest of the team to come walking around Parliament Hill with me, so I went with just my family. There was actually a joke that if I played 100 percent during our Saturday game, Thomas would pay my $5 cab fare to Parliament Hill. I was doing pretty well until the third end, when I sort of missed a shot. We laughed it off saying “there goes my trip to Parliament!” Unfortunately, I kind of missed my next shot too, so we laughed that one off by saying “and there goes my drive by!” It’s awesome how our team can joke around like that! 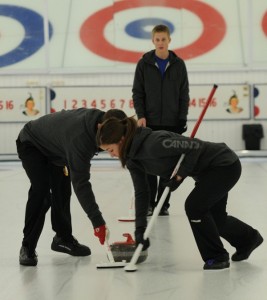 So since the rest of the team wouldn’t come along, my family and I headed to Parliament Hill on our own. I had been there twice before, but never at night. It was really fun running around and taking pictures with all the statues doing crazy poses, and just goofing off with my family. Sunday morning we played another early game. Danny Lamoureux from the CCA, who was instrumental in putting the details together in the formation of this Youth Olympic Games team, came to watch. In that game we pulled out another win, which put us in the consolation semi-finals. We got off the ice with enough time to eat, turn around, and go right back on. Facing the same opponents we had in our second game, we were on fire, and ended up running them out of rocks. With this win, we were in the final! Coming from 0-3 on the first day to a now 3-3 record, we were really improving and it was starting to show. We came all this way to get to the final, why not take the whole thing? Giving up three in the sixth, we took two in the seventh, stole one in the eighth, and stole again in the extra end to take the consolation final home. All in all it was a great weekend. We had a lot of fun, and it showed us a little bit of what it’s going to be like competing together in Innsbruck. I would like to thank the CCA for giving us the experience. Their support does not go unnoticed, and we definitely feel like we are part of a bigger team here in Canada. I would also like to thank our coach, Helen Radford, for not only coaching us through a great event, but helping me remember everything we did during this jam-packed weekend! The team will be together again in a mere two weeks to compete in Brandon, Manitoba.