First-day action in the Women’s competition at 2011 The Dominion Curling Club Championship in Richmond, B.C., kicked off on Tuesday afternoon. 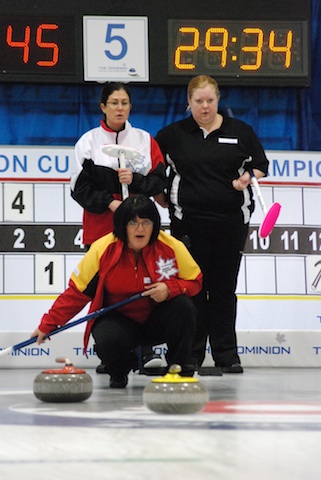 Twelve of fourteen women’s teams took to the ice for Draw 2 of the third annual national competition for club curlers. Team Yukon, skipped by Sherry MacInnis of the Atlin Curling Club met Team Alberta and skip Kendra Nakagama, who curls out of the Lethbridge Curling Club. Two big ends by Alberta – scoring 6 in the fourth end and 5 in the sixth end – resulted in a 14-2 victory and handshakes after six. A see-saw battle between British Columbia, led by skip Deb Goodwin and her team from the Comox Valley Curling Club, and Manitoba, with skip Meghan Armit of Winnipeg’s Granite Curling Club, ended in a 6-5 Manitoba victory. Armit, holding the team’s mascot, a stuffed bear dressed up in a traditional Manitoba jersey, says it’s a proud moment for her to be representing the curling-rich province of Manitoba.  “It’s an amazing feeling to represent the province…we have so many family and friends here at the club cheering us on, and all our fans back home.” Northern Ontario’s Melanie Patry of the Coniston Curling Club scored a big 4 in the third end – after two blanks – and stole 1 in the fourth to take a commanding lead that New Brunswick’s Shannon Tatlock, of Moncton’s Beausejour Curling Club, just couldn’t overtake. Northern Ontario came out on top of a 6-3 final. Ontario and Nunavut, skipped by Jodi McCutcheon of Toronto’s High Park Curling Club and Kristy Hewitt of the Iqaluit Curling Club, traded points for seven ends. But Ontario’s multiple scores – starting with a steal of 3 in the first end – proved too much for Hewitt’s foursome, and the teams shook hands after seven in a 9-3 Ontario victory. Two close matches resulted in identical 6-5 finals. Quebec’s Sylvye Turgeon of the Club de Curling Laval-Sur-Le-Lac stole in an extra end against Saskatchewan’s Patricia Yeske. In the battle of two eastern teams, Pam Osborne’s Remax Centre foursome from St. John’s, NL, squeaked out a victory over Nova Scotia’s Frankie Amos of the Mayflower Curling Club in Halifax, despite a huge Nova Scotia score of four to tie the game after seven. Prince Edward Island’s Lorianne Davies of the Cornwall Curling Club, and Northwest Territories’ Diane Baxter of the Inuvik Curling Club sat out the first draw with byes, but they will take to the ice this evening: PEI against Quebec, and Northwest Territories against British Columbia. In other match-ups, Nova Scotia meets Ontario; Saskatchewan meets Nunavut with both teams looking for their first win; Northern Ontario and Alberta will be looking for their second win; and Manitoba takes on Yukon. The Dominion Curling Club Championship is Canada’s first national championship for men’s and women’s curling teams at the club level. The event is fully funded and operated by The Dominion of Canada General Insurance Company. The Dominion is a proud supporter of curling across Canada and has been a strong supporter of the Canadian Paraplegic Association for over 13 years. Canadian owned and operated since 1887, today The Dominion is one of the country’s largest home, car and business insurers. Get to know The Dominion by visiting thedominion.ca.