Ontario, Saskatchewan and Alberta remained top dogs in men’s play Wednesday at The Dominion Curling Club Championship in Richmond, B.C., as they pushed their record to 3-0 after the early draw Wednesday. 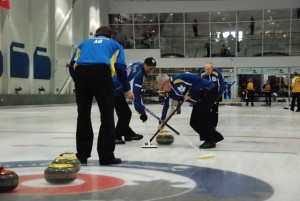 And they did it in convincing fashion. The three teams left little doubt that they are forces to be reckoned with, even though there’s still a long way to the finish line. And although it’s still early, Ontario’s Greg Balsdon of Richmond Hill, and Saskatchewan’s Brad Bibby of Prince Albert must already be sizing each other up and anticipating their matchup on the final draw Friday. The two skips, who sit atop the Blue Pool, don’t show any apparent weakness, and their meeting in the final round may decide the Pool winner. However, lurking in their rear-view mirror is Donald Clarey of Prince Edward Island who upped his record to 2-0 in the Pool with a 4-3 win Wednesday over Nunavet’s Ed Sattelberger 4-3. Balsdon raced to an 8-3 after five ends Wednesday and cruised to a 8-5 win over Paul Harvey’s crew from Newfoundland/Labrador, while Bibby gave up three in the first end but dominated after that to polish off Nova Scotia’s Andrew Atherton’s crew 9-3 in six ends. 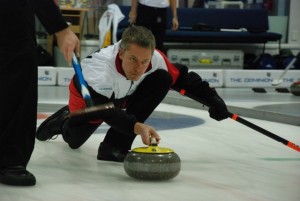 Ontario broke open a close game with an angle-raise takeout for four in the third end. Balsdon, who has a well-earned reputation for throwing the “high, hard one”, wisely used a more controlled weight to make the hit and stick for the big end. Ontario put the game out of reach with three more points in the fifth. Baldson said he wasn’t looking ahead to a match with Saskatchewan. “No, not at all,” he said. “All we’re looking for is to finish one or two (in the Pool), and by maybe the game won’t mean anything.” The top two teams in each Pool qualify for the playoffs. Saskatchewan looked strong for the second day in a row. “We started out a little slow and we were able to get our three back, and ran from there” said Bibby, who has outscored his opponents 25-9 in three games. 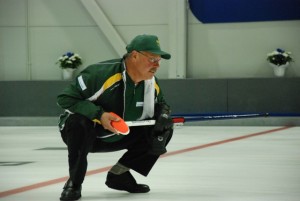 Bibby said his dominance on the scoreboard isn’t really what’s been happening on the ice. “Our opponents are missing by just a little bit,” he said. “And we’ve had a couple little lucky breaks. It helps. But everybody on our team has been playing really good.” Alberta’s Wade Thurber, meanwhile, moved to the head of the class in the Grey Pool after edging New Brunswick’s Barry Lewis 7-6. Thurber’s win, coupled with the first loss by Manitoba’s Barry Mandryk of Winnipeg, left the Albertans alone at the top with a 3-0 mark. Mandryk, who lost 8-6 to Northern Ontario’s Dale Dubinsky, dropped to 2-1. In other men’s action Wednesday, Yukon’s Scott Hamilton won his first game of the championship with a 4-2 win over winless Mel Sittichinli of the Territories. The men continue play with a late draw Wednesday. Round-robin play continues until Friday, with the finals set for Saturday afternoon. The Dominion Curling Club Championship is Canada’s first national championship for men’s and women’s curling teams at the club level. The event is fully funded and operated by The Dominion of Canada General Insurance Company. The Dominion is a proud supporter of curling across Canada and has been a strong supporter of the Canadian Paraplegic Association for over 13 years. Canadian owned and operated since 1887, today The Dominion is one of the country’s largest home, car and business insurers. Get to know The Dominion by visiting thedominion.ca.