The First Four Teams Head for the Cools Shots Final

The Cool Shots Club Competition for the World Financial Group Continental Cup of Curling got underway November 20th at the Langley Curling Club with 34 teams taking part in the action. 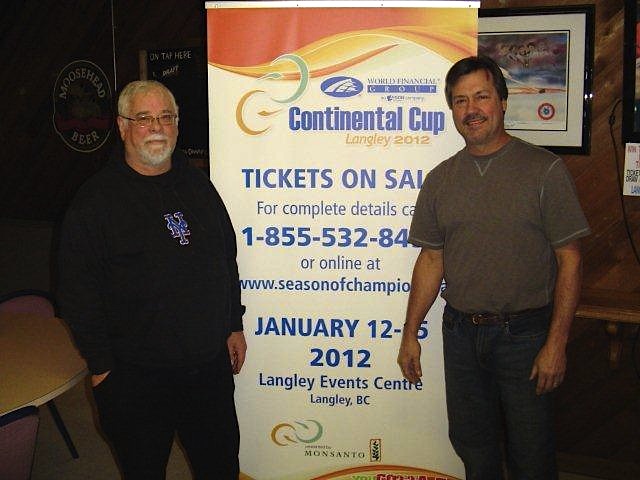 The field included members of the Langley and Delta curling clubs competing in the small-scale version of the roaring game, taking aim with miniature rocks on a shuffleboard-style table. The top four finishers move on to play in the Patch, Sunday, January 15th  – with cash prizes on the line for the players as well as $5,000 for the home club of the winning team. Jim Houghton and Guy Kimberley of the Langley Curling Club took first place winning $250. Darren Frycz and Wayne Frocklage, also of Langley earned $125 for second spot.  The Delta Curling Club took third and fourth with Laverne Theis and Dennis Jeffels and Greg Turner and Lorne Martin winning a $60 prize. The event was a roaring success with everyone enjoying the competition, as well the CFL western final with the home-town favourites securing a spot in the Vancouver Grey Cup. The next group hits the Cool Shots table 5:00 pm, November 25th at the Abbotsford Curling Club. “You Gotta Be There” January 12 – 15 for the 2012 World Financial Group Continental Cup of Curling in the Langley Events Centre.  Great seats are still available – get yours now by clicking here.