When the dust settled, the scene was set for just one tie-breaker game in the women’s field at The Dominion Curling Club Championship in Richmond, B.C. A log-jam at the top of the leaderboard was broken when Ontario defeated Saskatchewan in Draw 13 action. 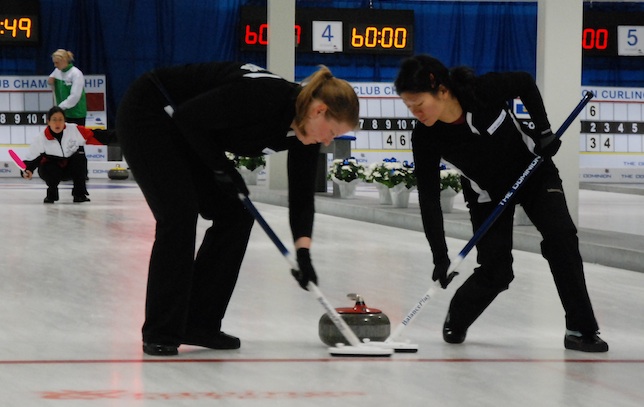 Saskatchewan (4-2) had a chance to prevent any tie-breakers with a victory over Ontario, but High Park skip Jodi McCutcheon stole two in the eighth end to win 7-5 and clinch first place with a 6-0 record.  Saskatchewan skip Patricia Yeske of Hillcrest Curling Club didn’t even have a chance to win with her final shot—the best she could have done was make an angle double-takeout for a blank and force an extra end.  Her shot sailed wide, giving Ontario the win, and a berth in Sunday morning’s semi-final (9 AM PST). Saskatchewan will play Quebec tonight at 8 PM PST in the tie-breaker to determine the second playoff team in the “Blue” pool. Sylvye Turgeon and her Quebec squad, sitting with a 4-2 record, stayed alive with a 6-5 win over Frankie Amos and her foursome from the Mayflower in Halifax, Nova Scotia. In the “Grey” pool there are no tie-breakers.  Manitoba’s Meghan Armit clinched first place with a decisive 7-2 win over Alberta, knocking Kendra Nakagama out of the playoffs.  Manitoba (5-1) will face Northern Ontario (5-1) in the Sunday’s semi-final, after Melanie Patry of Coniston Curling Club beat B.C. 10-2.  The Manitoba win eliminated New Brunswick (4-2) from playoff contention, despite Shannon Tatlock’s 8-2 win over Northwest Territories, which included a 7-ender in the fourth end. In the other game in Draw 13, Newfoundland and Labrador beat PEI 6-5 when the foursome from the Remax Centre in St. John’s was able to blank the eighth and run Cornwall Curling Club’s Lorianne Davies out of rocks. The Dominion Curling Club Championship is Canada’s first national championship for men’s and women’s curling teams at the club level. The event is fully funded and operated by The Dominion of Canada General Insurance Company. The Dominion is a proud supporter of curling across Canada and has been a strong supporter of the Canadian Paraplegic Association for over 13 years. Canadian owned and operated since 1887, today The Dominion is one of the country’s largest home, car and business insurers. Get to know The Dominion by visiting thedominion.ca.