Like every curling club across Canada at the beginning of the season, the St. John’s Curling Club in Newfoundland holds a new curler clinic. This is where our story begins. In this particular season, a young lady named Debbie wants to try curling. She shows up for the new curler instruction and is assigned to a group with an instructor named Mark Ward. Mark is a very capable instructor and knows the sport of curling very well, for he went on to play lead with Brad Gushue at the Nokia Brier in 2003 and 2004. (Jim Ward, Mark’s father, also saw Brier action, skipping Newfoundland in 1973.) Mark sees fine curling potential in Debbie, so he invites her back to the club for more instruction the following night. A romance is sparked. 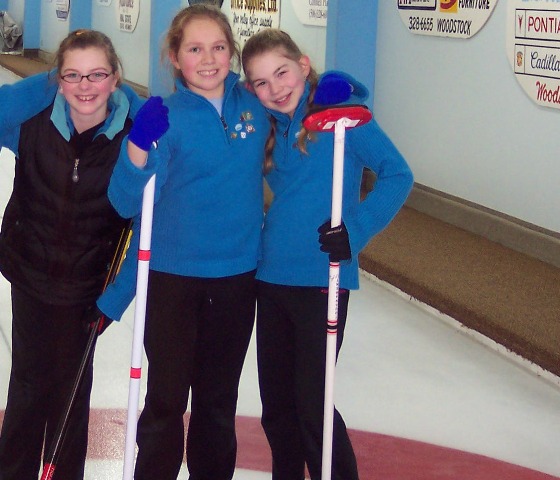 Fast forward a few years, Mark and Deb are wed and have a daughter, Cathlia, who begins curling at age three in a snowsuit and helmet on the ice at St. John’s. Due to Mark’s job, the family moves to Halifax where they curl at the Mayflower Curling Club. For five years, the family makes the Mayflower their curling home before again moving for Mark’s employment to Fredericton. In Fredericton, our story becomes even more interesting. Two years earlier, Jane DiCarlo and Katie Forward started playing Little Rocks at the Capital Winter Club in Fredericton. Jane became interested in curling while watching it on television with her parents. She called her friend Katie, who agreed to give it a try with her. One day Cathlia arrived at the club for Little Rocks to see about 30 kids curling. There were not many girls, so she naturally gravitated toward Jane and Katie, who happened to be the same age. “It was funny. I looked out on the ice, saw Katie and Jane, went out on the ice and became instant friends,” notes Cathlia. “I was naturally drawn to them.” The girls formed a Little Rock team by adding Cassandra Parsons. They entered a bonspiel, ate pizza, ran around the hotel and wore little blue sweaters. “We finished third at the prestigious 40-team New Brunswick Little Rock Jamboree. That is where we earned the nickname the Blue Girls,” remembers Cathlia. “All the adults just started calling us the Blue Girls because of our blue sweaters. The nickname has stuck.” 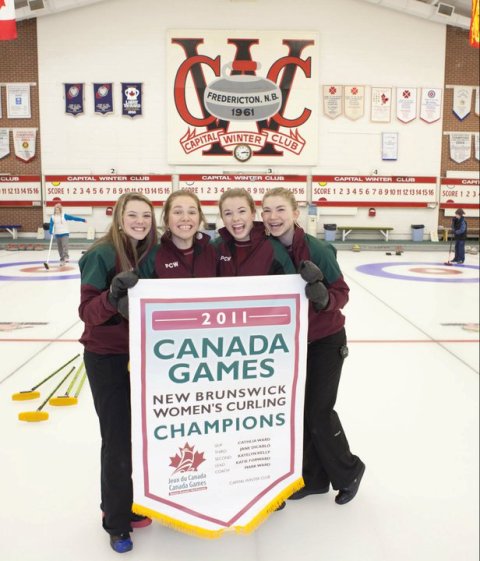 After one year, Cassandra left the team, moving on to pursue other sporting interests. Fresh out of Little Rocks joining the team was Katelyn Kelly. “It was instant chemistry with Katelyn on the team,” says Cathlia. “She fit right in with the Blue Girls.” Seven years later, Mark Ward was still coaching the girls and they were now wearing blue jackets. As well as having a strong bond and a good time together, the team found success. In the Under-15 Provincials, the team made it to the finals. They were down four coming home with last rock in the final end, to score five for the win with an incredibly tough shot. The team has also highlighted its success by winning the 2010 New Brunswick Canada Winter Games Trials, qualifying to represent New Brunswick at the 2011 Canada Winter Games in Halifax. Back in the 2008-09 season, when the team were all 14 years old, and after convincing Coach Mark Ward (Dad), the girls played in their first Preliminaries to qualify for the Provincials. Travelling to Moncton, the team expected to get blown out as they were playing much older teams. They won the first two games and all of a sudden found themselves in a qualifying game. The game went into an extra end, which they had never played before. They had hammer and needed a draw to the button for the win. “I let go, Jane yelled HARD, and the girls swept it the whole way down the sheet, narrowly getting by a guard, and the rock came to rest on the button”, recollects Cathlia. “We jumped and hugged each other. It was an amazing day.” Moments later in the lounge, none other than world champion and Olympic gold medalist Russ Howard came up to offer the team congratulations and shake hands. He said to Cathlia, “Nice shot, I couldn’t have done it better myself”. Now participating in high school curling, the Blue Girls have paired off to attend different schools. Katelyn and Cathlia attend Fredericton High School, while Jane and Katie attend Leo Hayes High School. Each of their teams has won the New Brunswick High School Curling Championships once. 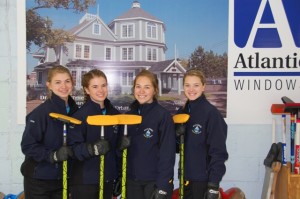 The team continues to work very hard. If there are no games to play, they train on the ice three or four times a week. They have been invited to play in the Super League, with top notch teams such as James Grattan and Andrea Kelly. Despite all the time spent at the curling club, Cathlia spends even more time there with the Little Rockers, as she helps to operate the weekly program and coaches a team herself. “I plan to be certified as a coach very soon.” From a chance meeting and a romance of a man and woman, to young girls bonding with friendship at Little Rocks, the Blue Girls of curling in New Brunswick have an interesting story – and the last chapter has yet to be written. If you know of a Little Rock curling program or a special Little Rocker that has a story to be told, I would be thrilled to hear from you. Contact me at email, [email protected].