The Greatest Games on Ice Meet in Lethbridge

The promotions team for the 2012 Ford World Women’s Curling Championship was on hand January 6th when the Lethbridge Hurricanes hosted the Medicine Hat Tigers in a classic Western Hockey League rivalry. 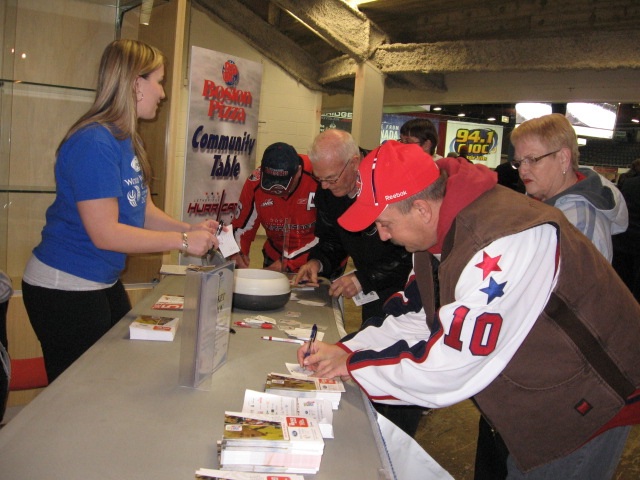 The action took place at the ENMAX Centre… the venue where the best women’s teams in the world will compete March 17 – 25 with the world championship title at stake. Rock 106, game-day sponsor for the game – and a media partner for the Ford World Women’s Curling Championship – invited the curling crew to be there to promote the event.  The Hurricanes have also signed on for the long run with regular ticket messages on the Jumbotron and game announcements throughout the season. The volunteers were there to let everyone know about the great value that comes with an event pass to championship curling.  Along with a seat to see the best athletes in the world, you can be part of an experience that’s unlike any other sport. It includes complimentary admission to the Original 16 Patch – the party of a lifetime with a great choice of food and beverages, and live entertainment from some of the best bands in the country. You’ll also have the chance to meet the competitors at Team Autograph sessions and Up Close and Personal interviews… where they sit down in a relaxing environment and you can ask the questions. “You Gotta Be There” for the 2012 Ford World Women’s Curling Championship… when the greatest names in the women’s game take to the ice at the ENMAX Centre.  Get a prime seat now just by clicking here.