Over the past few months the Capital One Rocks & Rings team has been very busy getting set up and started in 6 new cities in Ontario. Thank you to the Ontario Trillium Foundation for a grant that has assisted us in bringing this program to all of these new locations. In addition to our many Canadian locations we are now running in Barrie, Niagara, Kingston, Kitchener-Waterloo, Sudbury and Thunder Bay. 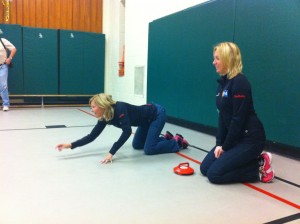 Leigh Armstrong and Sherry Middaugh show the kids how it's done! (Photo: Capital One Rocks & Rings)

Barrie and the Simcoe County area was the first launch we did this year. We got the show on the road at Maple Grove Public School where over 150 students took part in the program. It was very exciting for the kids as Sherry Middaugh and Leigh Armstrong from the Ontario women’s Team Middaugh were both on hand to join in on the activities with the students. CTV and two local papers showed up to capture the excitement on tape. Rick Meraska, teacher at Maple Grove Public School stated, “This program has excellent curriculum elements and activities for our students and it’s great to see it come to our district”. Since launching in mid October we have booked over 20 schools in Simcoe County already. 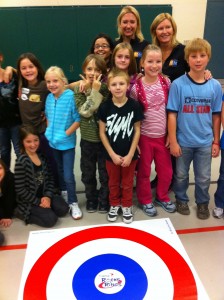 Leigh Armstrong and Sherry Middaugh pose for a photo with the kids! (Photo: Capital One Rocks & Rings)

We continued launching in a new city every week until early December where we finished our last launch in Thunder Bay. What a launch it was with CBC airing a radio broadcast with Leslie Kerr from the Northern Ontario Curling Association ahead of time. In addition two local television stations and one newspaper made it out, plus representatives from various curling events coming up in Northern Ontario which made it a great success. We greatly appreciate the support we received from the schools and communities to continue the success of this program. Check out our website for some of the media coverage from these events at www.rocksandrings.com . We hope to bring Capital One Rocks & Rings to more cities soon and are currently launching in Regina, Saskatoon and Montreal so stay tuned. Abbie Darnley, Rock Solid Productions