The Road to Red Deer: Newfoundland and Labrador Update

The road to the 2012 Scotties Tournament of Hearts in Red Deer continues with an update from Newfoundland and Labrador. Heather Strong and her St. John’s Bally Haly team of Laura Strong, Jen Cunningham and Stephanie Korab captured the Newfoundland & Labrador Scotties Women’s Curling Championship on Saturday, January 21 in convincing fashion. Trailing 3-1 to Laura Phillips after three ends in the four-day event’s finale, Strong tied the game with a deuce in the fourth end, before stealing 2 in the fifth, 1 in the sixth, 2 in the seventh and 1 in the eighth for the 9-3 win. 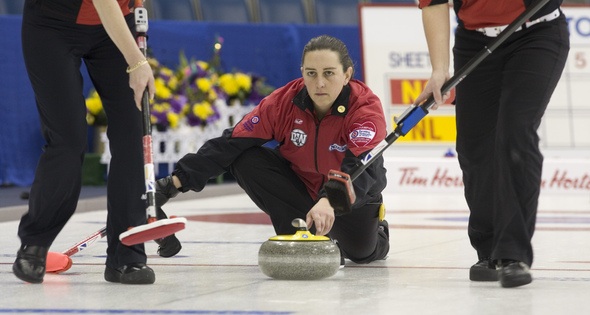 Heather Strong will represent Newfoundland and Labrador at the 2012 Scotties Tournament of Hearts in Red Deer, Alberta (Photo Andrew Klaver)

Her trip to Red Deer for the 2012 Scotties Tournament of Hearts will be Heather Strong’s tenth crack at the Canadian women’s championship. Twice she has finished with 7-4 records on the national stage: in London in 2006 and in Regina in 2008. Younger sister Laura has been along for six previous national shootouts. At the conclusion of round-robin play at the Re/Max Centre in St. John’s, four of the five teams in the competition were still in contention. As the top finishers in the round-robin with a 3-1 record, the Strong foursome drew the bye straight to the final. Three teams finished with 2-2 records, which meant that head-to-head records came into the playoff equation. Laura Phillips and her St. John’s Curling Club team of Marian Templeton, Marian Dawe and Jeannette Hodder were granted the semi-final berth, while reigning provincial champion Stacie Devereaux had to earn her way there with a 7-6, extra end tie-breaker win over Shelley Nichols. In the semi-final, Phillips built up a 6-0 lead after five ends in cruising to an 8-4 victory over Bally Haly’s Devereaux and her support crew of Erin Porter, Alysha Renouf and Heather Martin. That set up the final game against Strong. Things looked good early for Phillips, who was attempting to win the provincial title for the sixth time, until Strong started to steal everything in sight. The 2012 Scotties Tournament of Hearts takes place February 18-27, at Westerner Park in Red Deer, Alberta.