Mixed Results for Team Canada on Day Three in Karuizawa

Team Canada had mixed results today at the Karuizawa International Curling Championships, with our men winning and our women losing on this single game day. 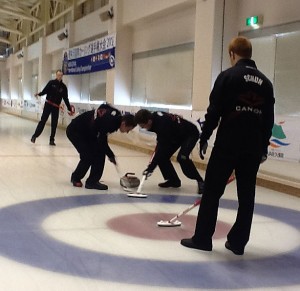 The Canadian men squared off against Japan, and started out with a nice deuce in the first end.  They then maintained control the rest of the way, trading singles with Japan over the next four ends.  Japan actually looked to be set up for a deuce in the sixth end, that is until Canadian skip Colin Thomas made another one of his patented big weight doubles to take it away from them. Canada then played a near perfect team end in the seventh, and ended up stealing two when the Japanese skip rolled out on his last rock.  We then ran them out of rocks in the eighth, and posted an impressive 6-4 victory. The boys from the rock now sit alone in first place with a 4-1 record. Our Canadian women’s team took on a solid Japan Selection team, and carried the play for the great majority of the game. However, it turned out to be a defensive struggle, due primarily to the opposition’s highly defensive tactics, and the score was tied at 1-1 heading in to the sixth with Canada having the hammer. 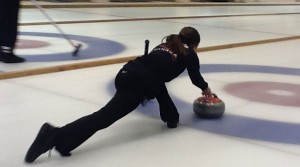 As the end played out we were left with a relatively short raise take-out to score two.  Unfortunately, skip Laura Crocker’s last shot ran much straighter than expected, and we ended up hitting the object rock a little too thin.  The net result was a pivotal steal of two, which turned out to be the difference in the game. The final score was 3-2, which is the same as the girls’ current record. Tomorrow will be a very important day, with playoff berths on the line for both Canadian teams.  The men take on China and Germany, while the women face China and Denmark.  I have a very good feeling that both will find themselves playing on Sunday. Go Canada Go! Rob Krepps, Canadian University Coach