The M&M Meat Shops Canadian Juniors got underway Saturday morning in Napanee, Ontario, with games at both the Strathcona Paper Centre and the Napanee & District Curling Club. 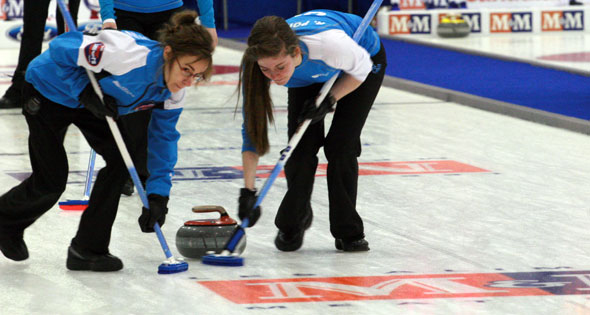 Quebec and Alberta got off to perfect starts in both the men’s and women’s championships. Jocelyn Peterman’s Red Deer team held on for a 9-8 victory over British Columbia’s Kesa Van Osch of Nanaimo, while Edmonton’s Brendan Bottcher whipped British Columbia’s Josh Hozack of Victoria, 7-2 in a game conceded after eight ends. Meanwhile, Félix Asselin of Montreal clipped Ontario’s Brett DeKoning of Omemee, 5-2, while Roxane Perron of Ste-Foy edged Ontario’s Jamie Sinclair of Manotick, 7-5. In other games, featuring New Brunswick versus Newfoundland/Labrador, the provinces split decisions. Josh Barry of Fredericton defeated Colin Thomas of St. John’s 6-4, while Erica Trickett of St. John’s prevailed by the same score over Jennifer Armstrong of Rothesay. For Alberta’s 20-year-old skip Bottcher, it’s his second time to the national championship, along with second Landon Bucholz and lead Bryce Bucholz. Third Evan Asmussen is new to the team. In 2010 in Sorel-Tracy, Quebec, Bottcher finished with a 6-6 record, losing a couple of tough ones along the way. “We did okay back then,” said Bottcher. “It was a basic experience, a learning curve for us. It definitely calms the nerves the first couple of days (being here before). We learned a lot back in 2010, how we need to prepare for an event like this. “The game (today) well went. All four of us curled pretty good. It’s a long week though. I want to make the playoffs first, that’s our goal. Definitely, no more than three or four losses, but we’re not thinking that far in advance. We just want to go out and win our next game this afternoon (against Saskatchewan).” Round robin play continues on Saturday with draws at 2:30 pm and 7:30 pm at both venues. 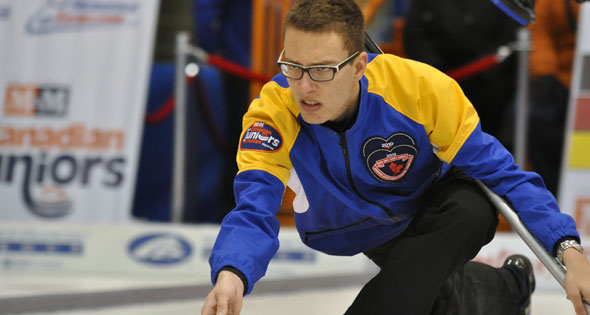 Thirteen men’s and 13 women’s teams (representing the 10 provinces plus Northern Ontario, Northwest Territories and Yukon) are competing. At the conclusion of the round robin Friday afternoon, and, after any tiebreakers, the first place teams advance to their respective finals, while the second and third place finishers meet in semi-finals. TSN will televise both the women’s and men’s finals, at 7:00 pm ET, on Saturday, February 11 and Sunday, February 12, respectively. The winners will then represent Canada at the World Juniors, March 3-11 in Östersund, Sweden. The Canadian Junior Men’s Championship began in 1950 in Quebec City. Alberta has since won a leading 15 titles, Saskatchewan is next with 14, while Ontario has nine, the last by Jake Walker in 2010 in Sorel-Tracy. Saskatchewan has won a leading 11 Canadian Junior Women’s titles since 1971, while Ontario has just three crowns, the last by Rachel Homan in 2010 in Sorel-Tracy. The men’s and women’s championships were contested separately until being combined, beginning in 1987 in Prince Albert, Saskatchewan.