Terry Odishaw did it the old-fashioned way; he earned it! He and his Curl Moncton teammates Andy McCann, Scott Jones and Grant Odishaw scratched and clawed their way to the title in claiming the 2012 Molson Canadian Men’s Final Eight Championship which was played at the Thistle St. Andrews Curling Club from February 1 – 5. The Odishaw rink finished round robin play in Saint John tied with three other teams at 4-3, two wins off the pace set by first place finisher James Grattan. With nine previous Brier appearances to his credit, Grattan stood on the doorstep of another with the bye he received to Sunday’s championship final 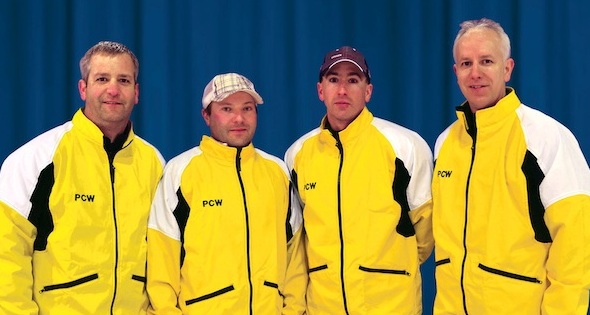 It was overtime however, for the four teams tied in second place. In Saturday afternoon tie-breaker action, the Odishaw squad needed a score of 2 in the tenth end in defeating Campbellton’s Zach Eldridge and his team of Chris Jeffrey, Adam Firth and Rob Daley. At the same time Marc Lecocq and his Nackawic Curling Club team of Mike Kennedy, Jamie Brannen and Dave Konefal easily rolled to an abbreviated 10-1 win over Jeremy Mallais, Jason and Darren Roach and Jared Bezanson of the Riverside Curling Club. The semi-final game between the Curl Moncton foursome and the Nackawic quartet was a closely contested affair that could have gone either way. Knotted at 4 apiece after nine ends of play, Odishaw, with the advantage of last rock, managed to manufacture the single point necessary for victory and a place in Sunday afternoon’s final. Armed with the first-end hammer in the championship game, Grattan and his Gage Golf and Curling Club team mates Charlie Sullivan, Steven Howard and Peter Case were forced to take a single before Odishaw struck for 3 in the second end and stole 3 more in the third. This early game dominance proved to be insurmountable for the Grattan foursome, who came out on the wrong end of a 10-3 score. Terry Odishaw returns to the Brier as a skip for the first time since 1998, when in Winnipeg, he finished with a record of 4-7. The 2012 Tim Hortons Brier takes place at Saskatoon’s Credit Union Centre from March 3-11.