Alberta advances to women’s final tonight against Manitoba at Juniors

Alberta, skipped by Jocelyn Peterman of Red Deer, advanced to tonight’s women’s final [live at 7:00 pm ET on TSN (RDS in Quebec)] of the M&M Meat Shops Canadian Junior Curling Championships in Napanee with a 8-7 decision over British Columbia (Kesa Van Osch of Nanaimo) in Saturday afternoon’s semi-final. Down 6-4 in the ninth end, Peterman made a nifty double with her last one, chipping out two British Columbia counters, to take four and an 8-6 lead. It was one of several doubles she made during the game to either keep her team in it or, in this case, assume control. 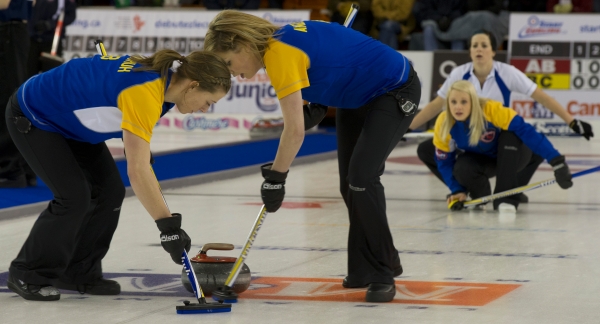 Van Osch was left with a very difficult double in the 10th to tie it, but could only count one. “Yes, it was either make it or the game’s over,” said Peterman, about her ninth end double. “I was a little nervous. It didn’t look like it was going our way, but the last shot really helped.” Peterman fired 78% to Van Osch’s 69%, yet British Columbia outcurled Alberta in team percentage, 77%-69%. Now, Alberta will face Manitoba (Shannon Birchard of Winnipeg) in the final. Birchard handed Peterman her first loss of the week on Tuesday, a 9-5 decision. Both teams completed the round robin with identical 10-2 marks, but Manitoba earned a bye to the final for its round robin win. “We’ve played them (Manitoba) a couple of times before. We played them in an invitational spiel in Brandon when they beat us in an extra end, then we beat them in a qualifier.” Since 1971, when the Canadian junior women’s championship began, Manitoba has won nine titles, the last being back-to-back victories by skip Kaitlyn Lawes in 2008 and 2009. Alberta has five crowns, the last by Heather Nedohin (Godberson) back in 1996. 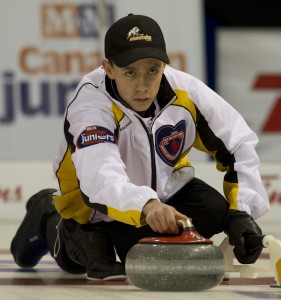 In the men’s tiebreaker for third place, Manitoba (Kyle Doering of Winnipeg) disposed of Nova Scotia (Stuart Thompson of Halifax), 9-4, with a crucial five-ender in the third being the game changer. Manitoba now will face off against Northern Ontario (Brennan Wark of Thunder Bay) in Sunday’s semi-final at 2:00 pm, with the winner facing first place Alberta (Brendan Bottcher of Edmonton) in Sunday night’s final (live on TSN/RDS at 7:00 pm ET). “We started off a little slow, but we really regrouped in the third end,” said the 16-year-old Doering, the youngest skip competing in Napanee. “We made pretty much every shot and my last one curled up just enough to get the five. That was the definite turning point. “It feels awesome (going to the semi-final). Words can’t describe what it feels like. Our goal coming into the event was to go ‘500’. So we exceeded that by a lot.” Northern Ontario edged Manitoba 5-3 at the Strathcona Paper Centre last Saturday in the first game of the week for both teams. “It was a tight game. I really struggled that first game. It took some getting use to, the Arena, for sure. Getting use to the ice and the curl. Now that we’re more adjusted, I think it will be a really good game. I like our chances. “We must have had four or five come-from-behind wins this week. Maybe it helps to get an extra game (tiebreaker) under our belts.” Northern Ontario, Manitoba and Nova Scotia had finished tied for second with 9-3 marks, behind Alberta’s 11-1 record. However, since Northern Ontario had defeated both Manitoba and Nova Scotia during the round robin, it earned the semi-final berth, leaving the other two provinces to fight it out for third place today.