They’re going to Sweden! That was the stated goal of the Alberta women’s team, skipped by Jocelyn Peterman of Red Deer, when they arrived in Napanee for the M&M Meat Shops Canadian Junior Curling Championships. Well, mission accomplished. They’ll now represent Canada at the World Juniors in Östersund, March 3-11, after beating Manitoba (Shannon Birchard of Winnipeg), 12-6 in Saturday evening’s final at the Strathona Paper Centre. 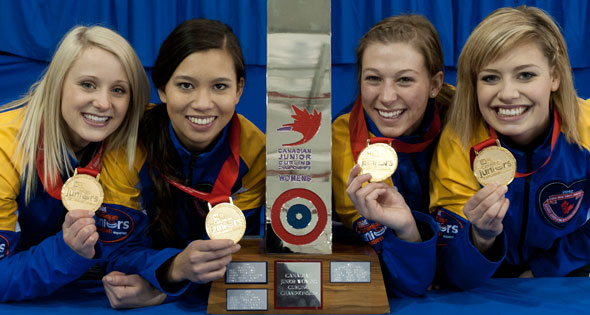 Fresh from an 8-7 win over British Columbia in the afternoon semi-final, Alberta was sharp from the outset, while Manitoba was not. “It’s been our goal all year (Sweden). It feels good,” said the 18-year-old Peterman, a Physical Education student at Mount Royal University. “ We played good. We knew what we were doing. We knew the ice from the semi-final. We felt a lot more comfortable with the ice, the fans, everything. “We lost the final at Canada Games last year, so we really wanted to come here, have a strong final and go to Sweden. Definitely, (that was the motivation). It helped playing in the (Canada Games) final with fans in the stands and stuff. So this wasn’t our first time (in this environment).” Two big ends determined the outcome. After the first two ends were blanked, Manitoba was forced to a single in the third. The game turned in the fourth end. It began with a perfect hit and roll behind cover by Alberta second Rebecca Konschuh. Then, after misses by Birchard and fourth rock tosser, Selena Kaatz, Peterman had a wide-open hit for four…and didn’t miss. That made it 4-1. But that was just the beginning, as it turned out. In the fifth end, Manitoba found itself in a heap of trouble again, staring at five red Alberta stones. Kaatz tried a tap back with her last to reduce the damage but to no avail, as her stone rolled into the 12-foot, leaving a quintet of enemy rocks on the board. 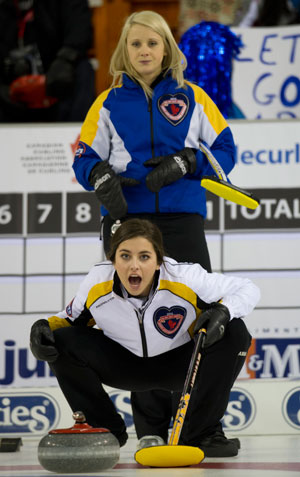 It was now 9-1 after five ends. It looked to be academic at that point. But there was no quit in the ‘Bison’. Manitoba responded with a deuce in the sixth end, before Alberta salvaged the seventh with a single on a runback by Peterman to go up 10-3. Manitoba answered with three in the eighth to close the gap to 10-6. But that was as close as they could get. When Alberta counted two more in the ninth, it was time to shake hands. It was the first Canadian Junior women’s title for Peterman, third Brittany Tran, second Rebecca Konschuh and lead Kristine Anderson in their first appearance. Last year, the team earned a silver medal at the Canada Winter Games in Halifax. Now, they’ll attempt to give Canada a leading ninth world junior women’s crown in Sweden. The last team to do so was skipped by Marliese Kasner (Miller) in 2003 in Flims, Switzerland. The victory was the sixth for Alberta since the Canadian junior women’s championship began in 1971. However, the last title was snared by Heather Nedohin (Godberson) way back in 1996 in Edmonton. “They’re (Alberta) really good and they’ll do well (at the World Juniors),” said the 17-year-old Birchard, also making her Juniors debut. “We struggled with the ice and the weight a little bit. It was a little keener than before. We also struggled with our execution and we let a few ends get away from us. “It’s unfortunate that it was on national television. But making it to the final is an achievement.” Shooting percentages helped tell the tale. Peterman fired 85% while her fourth rock counterpart, Kaatz, was 62%. Overall, Alberta also held a 83%-74% team edge. Manitoba and Alberta had finished tied for top spot in the round robin, both with 10-2 marks, but Manitoba earned a bye to the final for its 9-5 victory over Alberta on Tuesday. It was Peterman’s first loss of the week. Peterman thus had to meet British Columbia (Kesa Van Osch of Nanaimo) in the semi-final. The men’s final is set for Sunday at 7:00 pm ET, live on TSN/RDS. Alberta (Brendan Bottcher of Edmonton), the first place finisher with an 11-1 mark, will meet the winner of the semi-final (2:00 pm) between Northern Ontario (Brennan Wark of Thunder Bay) and Manitoba (Kyle Doering of Winnipeg).