The Final Four Join Club Cool Shots for the Scotties

The second stage of the Cool Shots club challenge was hosted by the Red Deer Curling Centre February 6-10 with 48 teams shooting for the chance to qualify for the grand championship on opening Saturday at the 2012 Scotties Tournament of Hearts – the Canadian women’s curling championship. 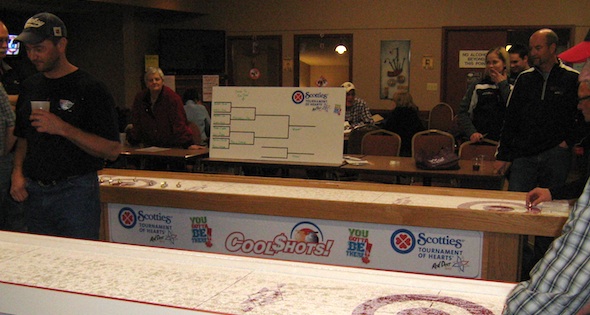 Wilson & Jason Lougheed came through with the victory that included a $400 cash prize and a pair of Opening Weekend event passes to the Scotties.  Shaun Planaden & Adam Lamb, Kerry Boon & Jason Chatwood and Darcy Collisson & Gordie Green will also move on to face the four teams that qualified during the January 23-25 competition at the Innisfail Curling Club. The stakes will grow for the championship round February 18 in the HeartStop Lounge presented by Original 16.  The champs take home a $1,000 cash prize and $5,000 will be presented to their home club. A pair of Full Event passes are awarded for every 15 teams registered in Club Cool Shots, so the Red Deer Curling Centre received six ticket packages for all 22 draws of the Canadian women’s curling championship. “You Gotta Be There” for the 2012 Scotties Tournament of Hearts February 18-26 at Red Deer’s Westerner Park.  See who wins Cool Shots on opening day… and stay all week for the excitement of our national championship. A great selection of seats is still available – click here to get yours now.