It boiled down to an extra 11th end, a last draw shot, a measure and a victory by two centimetres on the gauge. Alberta’s 6-5 sudden-death semi-final decision over Manitoba on Saturday night at the Enmax Centrium denied four-time Scotties Tournament Of Hearts champion Jennifer Jones of a fifth title for the second straight year. The winning draw proposition was an open in-turn with Manitoba counting and guarded with a bite of the four-foot ring. “I heard Laine (lead Peters) give the splits and I thought that would be back four-foot. A little heavy. That’s why the girls never laid a broom to it,” said Edmonton skip Heather Nedohin whose rock ground to a halt in the nick of time in that back four-foot. 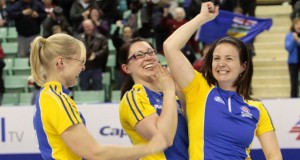 Heather Nedohin and Team Alberta celebrate winning the Semi Finals at the 2012 Scotties Tournament of Hearts. (Photo by: Andrew Klaver)

“Honestly, from the overhead camera, I didn’t think it was us,” added Nedohin, reflecting what most people viewing the camera shot believed. “Obviously, from a measure, it was that close,” said Nedohin. “I didn’t see the umpire point to our rock. I was in Amy’s (alternate player Nixon’s) arms already. Because she didn’t think it was us and I said, ‘Neither do I’. And then she said, ‘Heather, it’s us’. And I just jumped into her arms. And then she said, ‘They’re re-measuring’. And I said, “I can’t handle this.” Second later . . . “I’m in shock right now. I’m going to enjoy this. That roar of the crowd was pretty sweet. I’m just so proud of the team. We battled against the No. 1 team in Canada and we played hard and we got it. “Halleluja! I brought it today. I thought we brought it as a team today. Both teams were pushing each other to make shots. I hope the entertainment value went up on the (TV) ratings.” (Continued Below…) Semi Final Photos [flickr-gallery mode=”tag” tags=”sf2012stoh” tag_mode=”all”] The victory moved Alberta (third Beth Iskiw, second Jessica Mair, lead Peters) against Kelowna’s Kelly Scott in today’s 1:30 p.m. Hearts final. It will be Nedohin’s first trip to a final since she played third for Cathy (King) Borst, winning in 1998 and losing in 1999. Scott owns national titles from 2006 and 2007. “If tomorrow is anything like today, tune in people, it’s going to be dramatic, it’s going to be good,” said Nedohin. “I expect to see some shots from Kelly and the girls. Lots of rocks in play. We had a great battle against them in the round robin. It’s the final. I would expect nothing less than the best from both of us.” The loss for Jones (Kaitlyn Lawes, Jill Officer, Dawn Askin) dropped her team to a bronze-medal match against Quebec’s Marie-France Larouche today at 8:30 a.m. “I don’t like the bronze-medal game at all,” said Jones. “I don’t think any player out here likes it. But we’ll come out and play it.” She credited Nedohin with “making a great shot to win”. “It’s disappointing, sure, but exciting that it went down to a measure. I thought we played better in the second half of the game and really fought to win the game. “We didn’t play as well as we wanted to but we had a great week and we’re really happy with how we performed in the round robin. We were just a little flat in the playoffs which is uncharacteristic for us but we’ll learn from that.(Continued Below…) Semi Final Media Scrum “It’s always tough losing in playoffs. We’ve lost them numerous ways. We wanted to play a little better than we did today but we put it all on the line and Heather made a great shot to win. It was a couple of centimetres. “I said all along it was a great field and Heather played outstanding today, Kelly played great yesterday, and I know it’s going to be an outstanding final.” Jones executed a open eight-foot draw against two Alberta stones for an opening strike. Nedohin had a chance for the two in the third after a blank second but rolled out her shooter hitting for the pair. Manitoba cashed two in the fourth on a picture-perfect Jones out-turn come-around tap on the button, but Alberta bounced right back with three on a routine takeout after Jones failed to get an intended roll behind cover. Jones blanked the sixth but nosed a hit in the back ring in the seventh to settle for a tying single. In the eighth, with Manitoba angling for a big theft, Nedohin executed a precise kill, hitting into a pocket of two Manitoba rocks in the four-foot after Jones had rubbed a guard with her last. Jones then blanked the ninth and an Officer freeze appeared to have a winning deuce set up in the 10th until Nedohin negotiated a path past a couple of guards for a double-kill. Jones then buried perfectly on the button, Nedohin was forced to draw to it leaving her opponent locked in for a tie, with a hail-Mary raise for the win which didn’t come off. Hence the overtime debate. “I dream about these shots,” said a joyful Nedohin of her crowd-raisers in the semi. “The crowd is energizing but I work really hard to calm my heart rate right down before I go to throw again. I’d be lying if I told you I don’t completely enjoy the moment of the uproar, but the game’s not over ‘til it’s over and until it is, you enjoy the energy of the shot and then get down to business again.” She said she was on her way for a rum and coke to celebrate. “Honestly, we’re going to keep playing like we’ve been playing and with the energy we’re creating. We’ve trained really hard and developed a plan to maximize ourselves and we have a lot of people helping us off the ice to make sure we’re good for on the ice. “We’ll do everything we can to make sure we’re there with our A-game tomorrow.” Alberta outpointed Manitoba in shotmaking 87-80 with Nedohin shooting 90 on last rocks to Jones’s 74.