They may not sustain it for the week — not with co-favourites Kevin Koe and Glenn Howard breathing down their necks — but the rookie Nova Scotians skipped by Jamie Murphy experienced a first Tim Hortons Brier day to remember on Saturday at the Credit Union Centre. Murphy, 30, and his CFB Halifax team of Jordan Pinder, Mike Bardsley and Don McDermaid followed up on an afternoon 9-5 victory over Jamie Koe’s Territories team with an 10-4 evening conquest of Charlottetown’s Mike Gaudet to stay alone atop the heap of competitors with a 2-and-0 record. 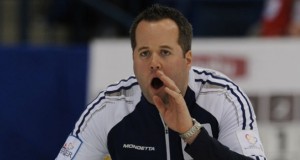 The Bluenosers left little doubt of their first-year Brier intentions, hammering a five on the board in the fourth end against the Polars, then opening with a four-ender against the Islanders. “I think we were more nervous going out for practice, opening ceremonies and Hot Shots,” said Murphy, “and when we were out in that environment for a while it felt pretty good.(Continued Below…) Draw 2 Photos [flickr-gallery mode=”tag” tags=”d22012brier” tag_mode=”all”] “We’re happy with the start. We’re just playing our own game. We’re trying to take it all in stride. Obviously it’s a very long week and this is only Day One but it’s kind of cool that we’re leading. “It’s been an awesome experience and I know it’s going to keep getting better.” The co-favourites got off to single victories on the day. Alberta’s Koe of Calgary outpointed Jim Cotter of British Columbia 9-5 on the late shift while Ontario’s Howard had an open hit to nudge New Brunswick’s Terry Odishaw 6-5 in the afternoon. “It was a good first win,” said Koe, who skipped the Brier winner two years ago at Halifax. “You always want to get off to a good start. You don’t want to put yourself in a hole. “It wasn’t pretty. Call it a typical Team Koe game — some good shorts and some bad shots. We mis-swept some. It was pretty sloppy but that’s to be expected — we’re getting the feel for the ice. We made the ones to win and that’s what counts. “I like the way the ice looks so hopefully we’re get better from here.” In other second-draw contests, Manitobas’s Rob Fowler of Brandon squared his record on the day at 1-1 with a 6-3 win over New Brunswick’s Terry Odishaw (0-2) while Brad Jacobs of Northern Ontario won a see-saw 7-6 affair from Newfoundland’s Brad Gushue in an extra end. The games were the first of the tournament for all four squads. httpvh://www.youtube.com/watch?v=BoWxkwmo3oU “We knew coming in we were going to have a busy weekend,” said Brandon’s Fowler. “We bounced back in this game and got the win so it feels good. “The two teams we played today we didn’t know a lot about. And that didn’t really allow us to set up a game plan and try to capitalize on certain things we’re familiar with. “Normally we’re known to be able to crack an end somewhere along the line and we had a couple of chances to crack an end in that first game and didn’t do it.” Gushue, who shot 74 per cent in the evening while Jacobs was one percentage point better, admitted “we were horrible in the extra end”. “We missed our first six shots. We had a horrible line call in the ninth. We just made a lot of mistakes,” he said. From Jacobs’s perspective,  “it was a game we really needed”. “I think we were all a little nervous and in the middle part of the game we were really sloppy. But in the end we got the ‘ win and that’s what we wanted.” In Draw Three on Sunday at 8:30 a.m. Alberta faces New Brunswick, Manitoba plays Newfoundland, British Columbia tackles Nova Scotia and Northern Ontario goes against P.E.I.