Team Canada got off to a strong start against Italy in morning action on the fourth day of competition at the World Junior Curling Championships, and carried the momentum into an afternoon victory against Sweden. “The Italians, coached by Canadian Dan Rafael, came to play against Canada,” reports National Team Coach Scott Arnold from Oestersund, Sweden.  “Almost every rock was in play in the first end.” 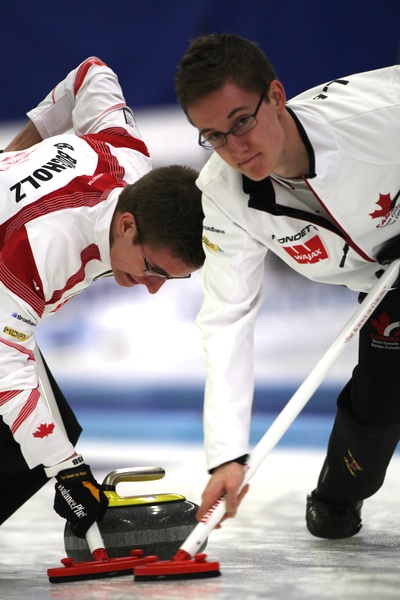 A perfect tap by skip Brendan Bottcher led to a measure that gave Canada an opening deuce. At that point, things got “sloppy”, says Arnold, but Bottcher was able to steal one in the second end with a clutch draw against two Italian counters. After Italy took a point in the third, Canada used strong rock positioning in the fourth to set up a run-back for the deuce and a 5-1 lead. An attempted run-back by Italian skip Andrea Pilzer was unsuccessful, and Canada stole 3 for an 8-1 lead heading into the break. Fifth player Parker Konschuh saw action in the sixth end, stepping in for ailing third Evan Asmussen. Curling 100% for the end, Konshuh helped his team hold Italy to one point – and handshakes on an 8-2 Canadian victory. After the game, Bottcher explained that Asmussen’s problem was not serious.  “He’s fine. His stomach was a little bit upset and he had to sit down for a while, but we had Parker to come in and he played great,” he said. “I thought we played really well today, probably one of the highest yet, so it’s good we can get onto a roll going into the play-offs.” In their afternoon game against Sweden, Team Canada stole points in the second and third ends before allowing Swedish skip Rasmus Wrana to score one point in the fourth. “Every rock was in play in the fifth end,” reports Arnold. “With Canada sitting 3 in the four foot, the Swedish skip made a fantastic hit and roll off of the wings to lie second shot. Canada tried a similar shot and narrowly missed to take a single point.” Another steal of 1 left Canada sitting on a 4-1 lead after six ends. The seventh and eighth ends saw another exchange of singles, and Sweden conceded to Canada with a 5-2 score. On Wednesday, Bottcher, Asmussen and front end Landon and Bryce Bucholz face the Czech Republic, then finish off the round robin on Thursday with games against Finland and Norway, who are currently tied with Team Canada for first place. News, live scores, galleries and video highlights can be found on the World Junior Curling Championship website.