WELLAND, Ont. – On the final day of the 2012 CIS/CCA University Curling Championships, hosted by Brock University at the Welland Curling Club, the Wilfrid Laurier Golden Hawks women and Alberta Golden Bears men captured the national title and will represent Canada in Trentino, Italy. In the women’s gold medal game, the Golden Hawks, led by senior skip Laura Crocker, captured their fourth national title in the past five years defeating the host Brock Badgers by the score of 9-2. Brock takes home silver for the second straight year. 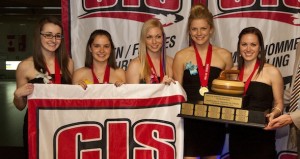 “I am very grateful to have the opportunity to end my university career on top,” said Laurier skip Laura Crocker. “It is amazing how much support we get from our university and it has shown through our team’s performance on the ice.” “The support we get from our university is amazing and that through their support we have done so well as a program,” said Sarah Wilkes. On the women’s side, Laurier’s Laura Crocker (Skip), Sarah Wilkes (Vice), Jen Gates (Second) and Cheryl Kreviazuk (Lead) all earned CIS First Team All-Canadian honours. Brock’s Joanne Curtis (Skip) and teammate Jessica Corrado (Vice) along with Manitoba’s Krysten Karwacki (Second) and Memorial’s Erica Trickett (Lead) were all named CIS Second Team All-Canadians. 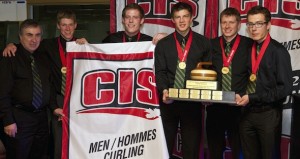