Nedohin stays unbeaten; Swiss up next

Sunday afternoon’s Draw Four at the Ford World Women’s Curling Championship at the Enmax Centre in Lethbridge was a learning experience for Canada’s Heather Nedohin. The good news for her was the story had a happy ending, a 7-5 win over one of the week’s favourites Bingyu Wang of China. It’s a game that Nedohin’s crew of Laine Peters, Jessica Mair and Beth Iskiw controlled most of the way, but every time the Canucks looked like putting the affair away, China bounced back and a tidy deuce in nine meant Nedohin had a one point lead and hammer coming home. She made no mistake hitting and sticking on shot stone for a 7-5 win. 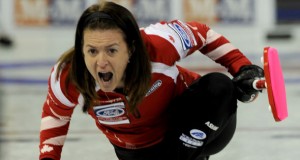 “It’s challenging out there when you are on a sheet for the first time with a new set of rocks and a new opponent and you are looking at the way you through and they throw … it’s a little bit of a wizard out there, it takes all four of us to do that, so in the first half we were trying to figure it out then we got our deuce and kind of controlled things after that,” said Nedohin on figuring out ice conditions. The third title event played on Alberta soil this year has started well for the Edmonton crew who seem to thrive on the home-ice advantage. “This so-called pressure, if that’s the case, we like it. I think it raises the intensity out of all of us, execution-wise we are doing well as a team, I like what I see with execution and if someone doesn’t (make a shot), someone else steps up… it’s about accountability.”(Continued Below…) Draw 4 Photos [flickr-gallery mode=”tag” tags=”d42012fwwcc” tag_mode=”all”] The win keeps Nedohin atop the table at 2-0 along with Germany and the team she’ll be playing tonight – Switzerland’s Mirjam Ott who handed the United States its second straight loss. Ott scored three with hammer in the tenth for an 11-7 win. Ott made two great shots for deuces in the early stages and controlled the flow of the contest. “We had a great start, made a couple of big shots and kept control of the game,” said Ott. “We still can improve a little bit, but we’re happy with where we are.” Ott is among the most experienced of the skips here in Lethbridge, so don’t be surprised if the Swiss are hovering come next weekend.” “We really have a lot of experience, so I hope by the end of the week that will help us.” The Americans find themselves in the same boat as the Chinese, expecting big things this week, but both of them are out of the gate at 0-2 and will face each other tonight. Sweden, meanwhile, bounced back from a devastating loss Saturday in which they gave up a three-spot to the Koreans in the final end to lose. (Continued below…) httpvh://www.youtube.com/watch?v=SoV2oXNVp3A It was a big 10-5, nine-end decision over the Czechs in two ways. It got the Swedes back in the win column (2-1) and also dealt the Czechs their first loss bringing them back to the pack with the same record. “We had a tough loss yesterday, an unnecessary loss, so it felt good to win this game,” said skip Margaretha Sigfridsson who throws lead stones. “Yesterday, for the last five ends, we weren’t really on the edge, maybe a little bit of low energy, and today we worked better on that front.” Both the Swedes and Czechs have the night off. In the other contest, the Koreans continue to impress running their record to 2-1, stealing a 6-5 win over Diana Gaspari’s Italians, in a game that looked like Italy might get its first win. Instead, Korea’s Ji-Sun Kim scored with hammer in nine to tie and stole one in 10 to win 6-5. Italy is now 0-3 and has the night off as do the Koreans.- As for the marquee match-up with the undefeated Swiss, Nedohin says her team will take it in stride. “I’m not going to underestimate any team here at the worlds. I know it will be another battle here tonight.”