It was curling’s answer to  Muhammad Ali’s ‘rope-a-dope’ in Draw Seven at the Ford Women’s Worlds at the Lethbridge Enmax Centre on Monday. Undefeated Heather Nedohin and her Canadian crew took the ice against (2-2) Czech Republic skipped by Linda Klimova. 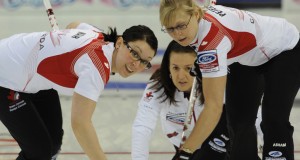 After a blanked first, Nedohin missed a hit-and-stick that would have forced the Czechs to do the same and score a deuce — something Nedohin was comfortable with, she said later. Instead, her shooter rolled out and left Klimova a half-rock raise takeout for five. Going into end three: Czechs 5, Canada 0. Czech mate? Not so fast. Queue the comeback. That it happened so early ended up being a blessing to Nedohin’s crew of Laine Peters, Jessica Mair, and Beth Iskiw. Methodically, they went to the attack mode in a change of strategy that Nedohin described as “getting meaner.” She scored two with hammer and actually had a hit-and-stick for three, but any regrets were soon washed away in the next end when Canada started a run of steals that quite simply was remarkable.(Continued Below…) Draw 7 Photos [flickr-gallery mode=”tag” tags=”d72012fwwcc” tag_mode=”all”] A steal of three made it 5-5 and it was that way at the break. Then three straight steals of singles put the Czechs in a chase position for the rest of the tilt, and though she stole one in the last end to make the final 8-7, Klimova could never come back from the adversity of a blown five-nil lead. “I would say we’ve been pretty slow coming out of the gate, on what we call ‘moon Monday’ because it looked nasty the first five,” said Nedohin. “But we just pulled together at the break, it was tied, and we had a much better back five,” said Nedohin, who credited her opponent when asked if the Czech’s inexperience led to blowing the big lead. “I think we knew we had to be a lot meaner out there and really put the pressure on them. When I say meaner . . . not like mad, angry, just more aggressive . . . it was tough out there.” The surprise of the competition seems to be Ji-Sun Kim of Korea who, after dropping her first game, has reeled off four straight wins. It was a tidy 8-3 win over American Allison Pottinger on Monday afternoon. Pottinger still seeks her first win at 0-4. “Every day, it’s been five hours of extra practice,” answers Kim, as to why her team is enjoying so much success here this week. “We are liking the ice, it’s been very good for us to be making shots,” she say with a smile, struggling a tad with English, but not so much with draw weight. The Americans will seek win one on the late draw against Eve Muirhead’s Scottish side who hit that Korean speed bump in the morning draw (7-2) to drop to 2-2. (Continued below…) httpvh://www.youtube.com/watch?v=S4x1MPKdcT0 Sweden continued to keep pace at 4-1 after beating Switzerland’s Mirjam Ott 7-4 to send the Alpiners to 2-2. In a back-and-forth contest, the Swedes set up to come home up one with the hammer and scored a deuce for the win. “We played fantastic today,” said Swedish boss Margaretha Sigfridsson, who throws lead rocks. “The second and third ends were very difficult for us and Mirjam (Ott) made some great shots, but in the end we played just a little better than Mirjam today. “We play her a lot, and we like playing her, she’s good. I just think as a team we are a little bit sharper now.” The Swiss are back on the ice against the Germans later today. Germany is 2-2. The Swedes are off. Italy’s Diana Gaspari has fought her way back into the competition at 2-3 after dropping the first troika. She beat China’s Bingyu Wang 7-5, as the former world champion continues to struggle at 1-3. Wang takes on the (1-3) Russians on the late shift. “We are very happy of course, to still be alive,” says Gaspari, who said at the midway mark of the game she didn’t think the team would win, but a big steal of three in the eighth was the difference as Wang tossed her last brick through the rings. “We ran out of energy a little, I think, but we are playing better now,” says Gaspari, who, with the night off says her team is looking forward to “a beer and a good sleep”. For Nedohin, who is alone atop the table at 4-0, her late-draw tilt against (2-2) Lene Nielsen of Denmark is a chance to learn from the afternoon’s miscues and get better. “Those second ends, we’ve been giving up two, three, and what five today?” Nedohin asked, shaking her head. “You’re going to see a different team out there in the second end tonight… I’m hoping.”