The Korean national curling team refuses to be counted out at the Ford World Women’s Curling Championship. Skipped by 24-year-old Ji-Sun Kim, the amazing Koreans pulled even with Canada and Sweden at the top of the pack again Wednesday, heading into the last day of round-robin matches at the Enmax Centre. 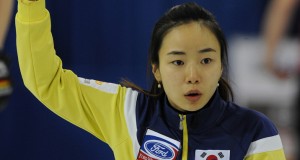