As the 2012 Tim Hortons Brier wore on in Saskatoon in early March, two storylines became apparent. 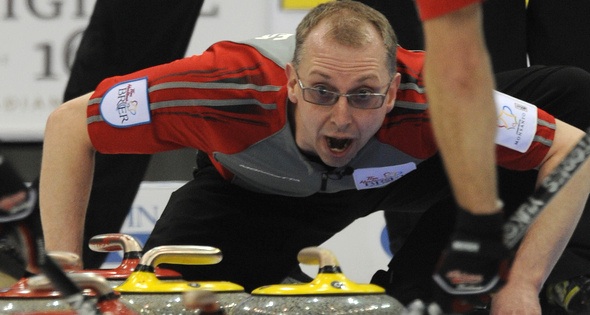 First, of course, was the expected strong play of the traditional curling powers, from Ontario, Alberta and Manitoba, and skips Glenn Howard, Kevin Koe and Rob Fowler did nothing to disappoint in that department. But more impressive than their performance had to be the stunning performance of Jamie Koe and his team from Yellowknife, featuring Halifax transplant Tom Naugler at vice-skip. Naugler cut his curling teeth in Halifax, and won a provincial mixed title in 1997 throwing second rocks for Scott Saunders’ team (featuring Colleen Jones at third) that finished 8-3 at the mixed nationals that year. After moving to Yellowknife, Naugler continued chasing curling glory, and got his first taste of the Brier in 2009 at Calgary when he served as the alternate for Koe’s team. Two years later, he joined the Koe team full-time and played at the 2011 Brier in London, where the Territories posted a 3-8 record. That set the stage for the Territories’ memorable run in Saskatoon, where Koe and Co. were the lone team to beat Ontario and made the playoffs with a 7-4 record before losing the Page three-four playoff game to Alberta in a battle of the Koe brothers, and then the bronze-medal game to Manitoba. Still, Naugler and his teammates left Saskatoon with memories to last a lifetime. Naugler and his wife are active in their home club, and Naugler has put in some volunteer time with the Yellowknife Curling Centre’s board of directors, and done the same for the Northwest Territories Curling Association’s board. Birthplace: Halifax Hometown: Yellowknife Curling Club: Yellowknife Curling Centre Current Team: Team Jamie Koe Position: Third Delivery: Right Nickname: People can call me whatever they want to! Quick Hits with Tom Naugler Do you have any superstitions? “Nothing, really; but if you ask my team, they seem to think that listening to Katy Perry before a game is good luck!” Three people, living or not, whom you would invite to a dinner party. “John Lennon (one of my favourite artists), Wayne Gretzky (my favourite hockey player) and of course my wife (brownie points)!” If you could be a star any other sport, what would it be, and why? “Golf or tennis. You determine your own fate by how well you play, plus there’s a lot of money to be won (not to mention warm temperatures)!” If you could change any rule in curling, which one would it be, and why? “Allow any team I’m on to have nine rocks an end! But realistically, the thinking-time concept seems like a smart way to go to speed up games.” What music, if any, do you like to listen to before a game? “Whatever’s playing in the background; I don’t listen to anything before a game.” Favourite: — Website?  “tsn.ca, yahoo.ca and twitter.com (@tntnaugler).” — Order from Tim Hortons? Hot chocolate and a Boston cream donut!” — Vacation destination? “Anywhere warm (I live in the north!). My wife and I most recently went to Italy for our 10th anniversary and we’d love to go back! — Junk food? “Cookies; for some reason people think I have a sweet tooth!” Do you have any pet peeves? “Don’t really have any – I’m pretty easy going.” Person who had the most influence on your curling career. And why? “My father. He was pretty active in the curling community in Halifax and once I learned how to curl, I went with him to the club every time he had league games and I always picked up a game. He started curling at a late age and made it to a national mixed, so I figured that if he could do it, why can’t I!” First thing on your Bucket List? “Take the family on a trip somewhere warm; rumour has it that’s in the works!” Favourite pastime between draws at cashspiels? “I like playing cards (crib mainly, but I’ll play anything).” Mixed doubles in the Olympics — thumbs up?  Thumbs down? And why? “I haven’t tried it yet, but I’ll say thumbs up for now since any type of curling exposure is good for the game; the more ways to curl in the Olympics, the better. I’m not sure I could do this with my wife — we’ve tried playing mixed before and that didn’t work out so well!” One thing most people don’t know about you? “People think I’m so laid-back, that they won’t believe that I have a temper (I blame my kids!).” Your ideal shot to win an Olympic gold medal: “Obviously any shot to win would be worth its weight in gold, but I’ll take a draw to the button (with backing).” 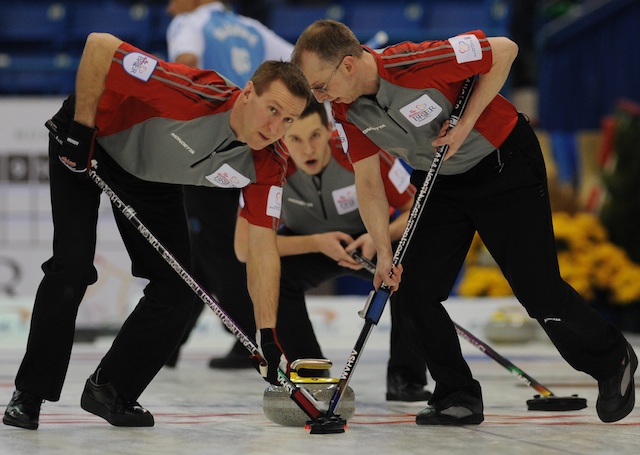