Around the House: Exciting Times in Moose Jaw

Ask Leslie Glova, Manager of Program Development at Moose Jaw’s Mosaic Place, about the past curling season and then stand back: the all-out excitement and enthusiasm she shares about the city’s new 210,000 square foot entertainment/sports facility is impressive. Equally impressive is the role the community played in getting this project rolling and, after many years, completed. 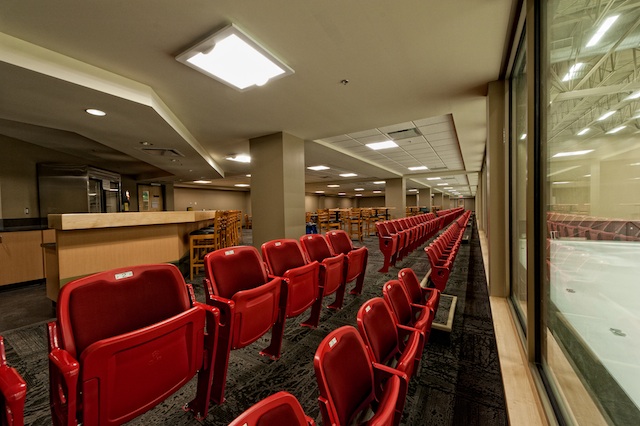 “So many people were involved to make it happen because they could see the vision of what this new complex would do for our city,” says Glova, a curler herself, who represented Saskatchewan at the 2011 The Dominion Curling Club Championships. “It was truly a community effort!” Moose Jaw has seen its share of curling facilities over the past hundred years. The Hillcrest Curling Club was one of the most recent, serving as Moose Jaw’s curling centre from 1968-2011, and just south of the city, at the 15 Wing Airbase, was the Bushell Park Curling Club.  In 2011, the two clubs amalgamated to form the Moose Jaw Ford Curling Centre – but that’s getting a bit ahead of the story. Let’s rewind about 11 years. “The Hillcrest Curling Club experienced issues with the floor heaving in the winter months due to frost underground pushing the piles up, forming hills in the ice and creating a less-than-ideal surface for curling,” explains Glova. Keeping the ice level became impossible, so a group of curlers looking for a solution founded the “Raise the Roof” campaign to build a new curling facility in Moose Jaw. 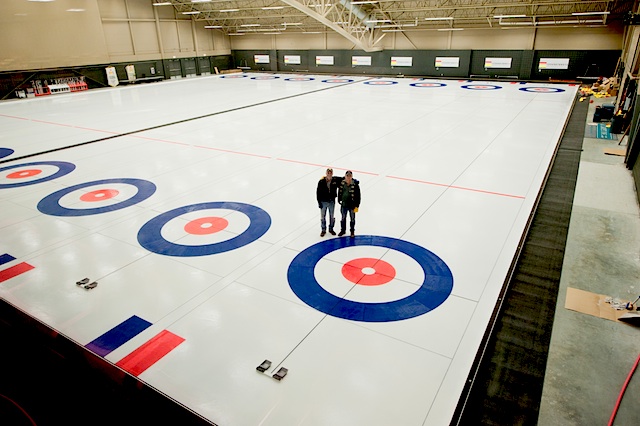 At the same time, a different sports group had started campaigning for a new hockey arena. Cue the community cooperation: The Multiplex Project was officially launched. “If you build it – they will come!” says Glova, reflecting on some of the highlights of the long process. “Civic voters approved the multiplex project again (originally it was approved in the 2006 civic referendum) in 2009 with a second referendum.” The project was underway. But the long journey to the official opening wasn’t without its challenges for the curling community. Over at the Hillcrest CC, conditions had deteriorated, and the ongoing operating costs severely strained the club’s finances. Making operating decisions became more difficult as the wait for the new multiplex dragged on. “On July 9, 2009, Saskatchewan Premier Brad Wall joined with municipal and federal politicians and local athletes and project supporters to officially break ground with a golden shovel!” remembers Glova.  “What a day!” The Multiplex Project officially ended in November 2011 with the grand opening of the brand-new Mosaic Place, located in the heart of downtown Moose Jaw, and home to the eight-sheet Moose Jaw Ford Curling Centre as well as a sports/entertainment bowl, banquet room, and meeting and retail space. 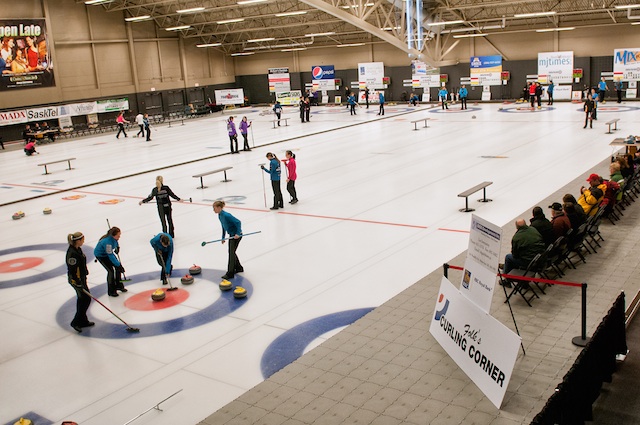 And how have local curlers found the first season in their new home? “It was amazing!” enthuses Glova. “From full evening draws, to an increased number of school classes coming out for Learn to Curl, hosting the Saskatchewan Curling Association Junior Women Provincials, bringing the Canadian Livestock National Bonspiel to Moose Jaw and so many other great curling experiences!  It was a real treat to see people enjoy our new curling centre for the first time as curlers and/or spectators.” One of the best parts of the new set-up, says Glova, is the way the two clubs – Hillcrest and Bushell Park – have joined together. And when new people see what the facility offers, they are eager to become part of the scene. “We have had people offer to do testimonials on our behalf [because] they are so impressed with the new curling centre. Organizers from a few of the different Provincial Bonspiels we held have told us the curlers are requesting the bonspiels come back to our rink next year – they enjoyed being here so much.” 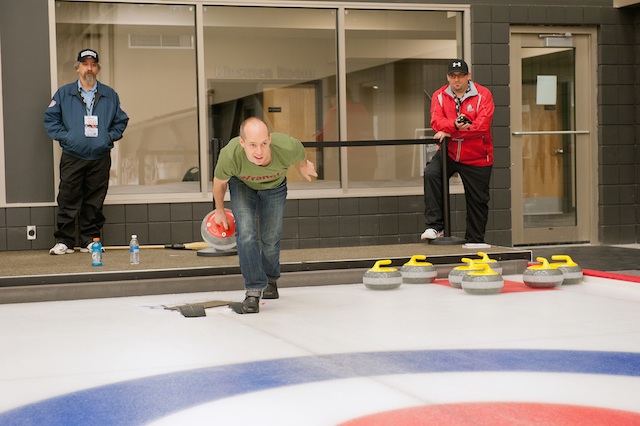 Another benefit to having an entertainment and sports complex attached to the curling club is that non-curling visitors get the urge to give the sport a try. Professional figure skaters and performers such as Country music’s Paul Brandt have stepped out on the ice with their crew to throw some rocks between shows. So, for the Moose Jaw Ford Curling Centre, season one is almost in the books, and the future looks promising. More than promising – it looks fantastic, thanks to the cooperative efforts and contributions of so many people. “We appreciate the support from the curlers that were out on the ice for our first season, the businesses that have come on board as our partners with the curling centre and the citizens at large who now come out to watch curling in a way they never could before,” says Glova. “In the curling off-season we can host major banquets, conferences and events too.  When the Capital One Canada Cup comes to Mosaic Place in November, the arena will be transformed into five sheets of curling ice and the Moose Jaw Ford Curling Centre will be converted into The Patch!  We now have opportunities in Moose Jaw that were never possible before the building of Mosaic Place. It’s so exciting!”