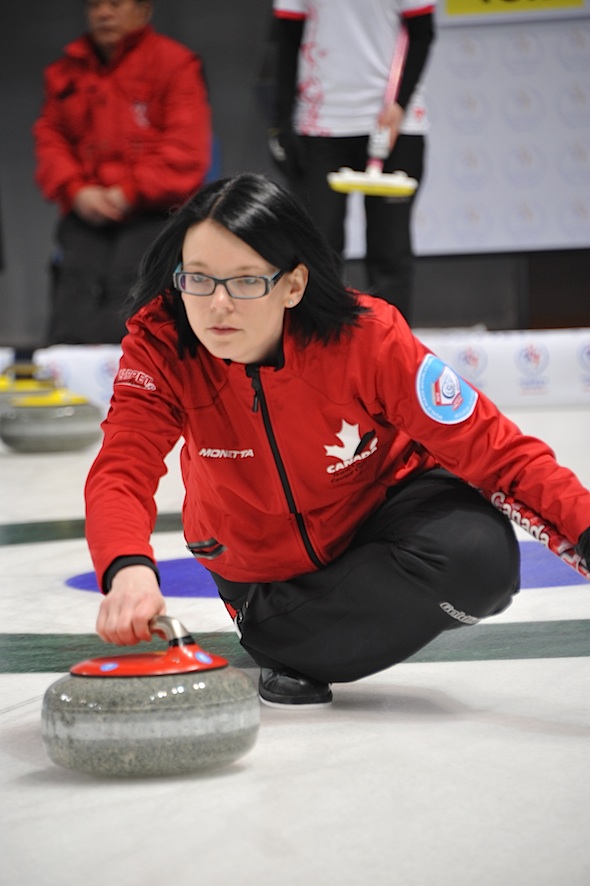 Thursday’s 8-5 victory over China was the meeting of two undefeated teams and could have an impact on the final standings if they both continue their winning ways and tie for first place in the Red group. “It was a wild game,” reports National Team Coach Jim Waite from Turkey.  “Canada had a chance for 4 in the first end but gave up 1. China had a chance for 4 in three but gave up a steal of 1. Although there were some misses, there were some great shots and it was good for us to win a close game like that over a good team. We could see them again before the week is over.” Waite reports that one of the challenges of playing mixed doubles format is the sweeping of take-outs, especially the quieter finesse shots. “It is difficult to throw and then get up and start sweeping much before half-way. Big weight hits seem easier as this is typical arena ice where hits will stay fairly straight.” The other challenge is the altitude, which can make breathing difficult. “We are at 10,000 feet in altitude and you even notice it is difficult to catch your breath when walking up stairs,” says Waite, adding that the Australian team, used to being only 30 feet above sea level, has asked to change hotels because they are finding it so difficult to be high in the mountains. In Thursday’s game against China, says Waite, “Dean swept his heart out, and if anyone thinks fitness is not a factor, they should have been watching that game. He was outstanding. It was not our best game as a team, but it was one that we gutted out for the win.” On Wednesday, the team got off to a slow start against Slovakia – giving up a steal in the first end on a missed double take-out that would have scored 4. Canada took control in the third end, taking 3 points, and stealing 3 more in the fourth. They led 6-2 at the break and never looked back, finishing with a 9-3 victory. Later, Eberle and Hicke scored an impressive 8-3 win over Turkey on what Waite calls “a perfect sheet of ice” at the Erzurum Curling Arena. “The ice is swingy and fast,” says Waite, “perfect for our sweeping and rotations and releases.” Canada scored 3 in the first end and maintained control the rest of the way, picking up a steal of 3 in the fourth end to lock up the win. “Chantelle has been terrific with her LSD (last stone draw) which decides last rock,” says Waite. “She has won every draw (with a couple on the button) giving Canada last rock advantage in the first end of every game.” Round-robin play continues with Canada facing Norway (1-5) on Friday, and Latvia (3-3) on Saturday. Tie-breakers will be played Saturday as necessary, and the playoffs – including quarter-finals, semi-finals and final medal games –take place on Sunday. Follow the 2012 Mixed Doubles Curling Championship Curling fans around the world can follow live coverage of the event via the World Curling Federation’s YouTube Channel which is embedded onto the homepage of the event website www.wmdcc2012.curlingevents.com Visit 2012 Mixed Doubles Live Coverage Schedule to see what games are being covered 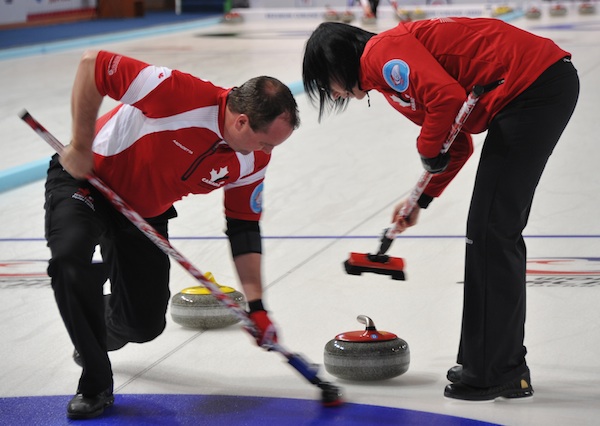