Canadians will play an important role in the curling events at the 2014 Olympic and Paralympic Games in Sochi, Russia, but they won’t all be throwing rocks or sweeping. The World Curling Federation announced Wednesday, June 6 that it has appointed eleven Canadians to serve as officials or ice technicians at the two curling competitions in Sochi. 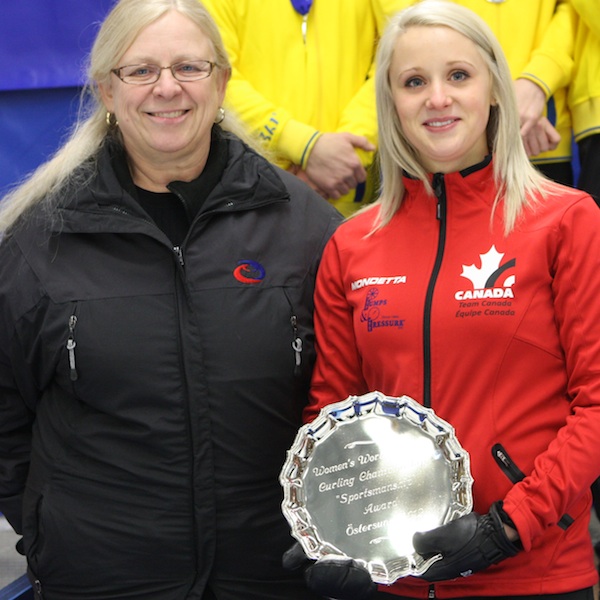 One of those officials is Kamloops, B.C.’s Dianne Barker, whose involvement in Canadian curling includes decades of officiating at provincial, national and international events. “I am honoured to have been selected to go to Sochi as a game umpire and to be part of the Olympic experience there,” said Barker from her home in Kamloops after receiving her invitation from Keith Wendorf, the World Curling Federation’s Development Officer and Director of Competitions. Barker knows the job well, thanks to many years as a volunteer official at events close to home including the 1986 Canadian Mixed Championship held in Kamloops, and the 1997 Scott Tournament of Hearts in Vancouver. She stepped away from officiating during her tenure on the CCA Board of Governors, but has been a seasonal regular at events since then, working at ten national and four world championships, including her most recent role as Chief Umpire for the 2012 World Junior Championships in Östersund, Sweden. Before the big event gets underway, Barker and other officials will have a chance to acclimatize to the arena in Sochi: the 2013 World Junior Curling Championships, February 28 through March 10, will serve as a trial run. Joining Barker at the World Juniors and the Olympics is Rae Kells, who will serve as Deputy Chief Umpire. Like Barker, Kells began her career as an official at events close to home. “The club I belonged to at the time (Glen Allen in Sherwood Park, Alberta) was going to be hosting Northern District Women’s play downs and they wanted to have officials present.  I thought this was something I could do to volunteer for the event and so I took the course that was offered,” she says.  “It was taught by Ron Anton in Edmonton, and I was hooked.  In 1992 I was living in Halifax and the Scott Tournament of Hearts was coming to Halifax.  I was given the opportunity to work as a National Official at that event, and have been involved in the officiating program ever since.” This will be Kells’ third trip to the Olympics, but she says the experience never gets old. “My reaction was the same as my appointment to the first one (Torino in 2006). I am delighted and honoured to be part of an Olympic Games.” 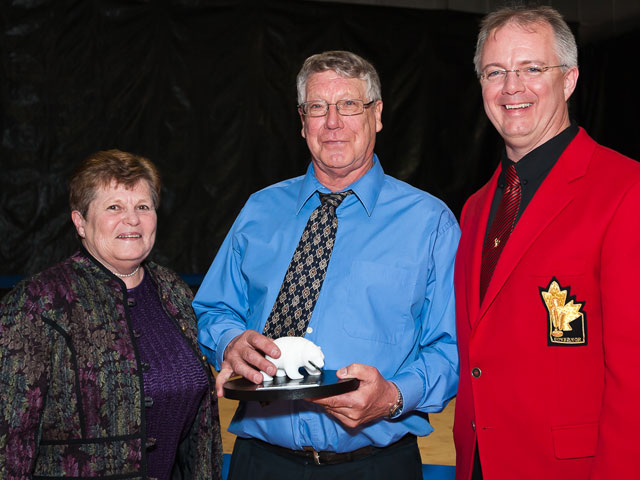 Linda Kirton, pictured here with Soren Jensen and the CCA's Bob Osborne, has a long history of involvement in Canadian curling events, including as co-chair of the 2012 Canadian Seniors Curling Championship, held in Abbotsford (Photo Betty Johnston)

Canadian officials will also be prominent at the 2014 Paralympic Games where Abbotsford’s Linda Kirton takes on the role of Chief Umpire, and her husband Daryl will serve as a Game Umpire. Both are long-time curlers who were inducted into the Abbotsford Sports Hall of Fame this past April. Their officiating careers began in the 1970s with their city’s annual cashspiel. “Teams were on an honour system,” says Linda Kirton, “and with the end result payout so large ($10,000) we wanted to get some kind of officiating into place.  We met with the CCA’s Warren Hansen, Director of Event Operations and Media, to set some kind of guidelines for our event.” Since then, they’ve officiated at a wide variety of national and international events and were thrilled to be part of the Olympic and Paralympic games in Vancouver in 2010. Barker isn’t new to the Olympic experience, either. In 2010 she volunteered at the Vancouver curling event as Deputy Head of Competition. “The atmosphere at the Vancouver Olympic Centre where the curling was held in 2010 was electric,” she recalls. “I don’t think I’ll ever forget the excitement and noise level of that event.” Linda Kirton delivered the Officials’ Oath on behalf of all officials working the 2010 Paralympic Games in Vancouver, and she says the hardest part was controlling her emotions as the opening ceremonies took place in front of 60,000 cheering spectators – and were broadcast live around the world. For Daryl Kirton, who served as Field of Play Supervisor at the Vancouver curling venue, the highlight came when the crowd broke protocol to sing “O Canada” in the middle of an end. “The Canadian men stopped play to enjoy the moment,” recalls Daryl. “Never happened before or will happen like that ever again.” While the curling athletes may get the spotlight, Barker, Kells and the Kirtons know that good officiating is crucial in every event – and that’s the role they and the other Canadian officials will play in Sochi. “We strongly believe in the team work of umpires to make championships run smoothly,” says Linda Kirton. “Each time we finish a championship, we hope it is not our last. We like what we do, and we hope we do make a difference. Curling has been good to us and this is our way of giving back. “The role of officials in curling is different than in many other sports in that we are there to ensure a level playing field for the competition, rather than to control the play,” explains Barker. “Curling officials are not paid and we give freely of our time and training for the love of the sport,” she says. “These are special people!” Canadian officials and ice technicians who will participate in the 2014 Sochi Olympic Games: Olympics Rae Kells (Deputy Chief Umpire) Diane Barker (Game Umpire) Ken McArton (Game Umpire) Dave Petursson (Game Umpire) Hans Wuthrich (Chief Ice Technician) Eric Montford (Deputy Chief Ice Technician) Paul Smith (Deputy Chief Timer) Paralympics Linda Kirton (Chief Umpire) Donna Butler (Game Umpire) Daryl Kirton (Game Umpire) Michele Gower (Game Umpire)