Penticton Pops are Rockin’ the House

The curling action has been hot and heavy in Cherry Lane Mall since Sunday, June 10 for the “Rockin’ with Dad” competition promoting the 2013 World Financial Group Continental Cup of Curling. 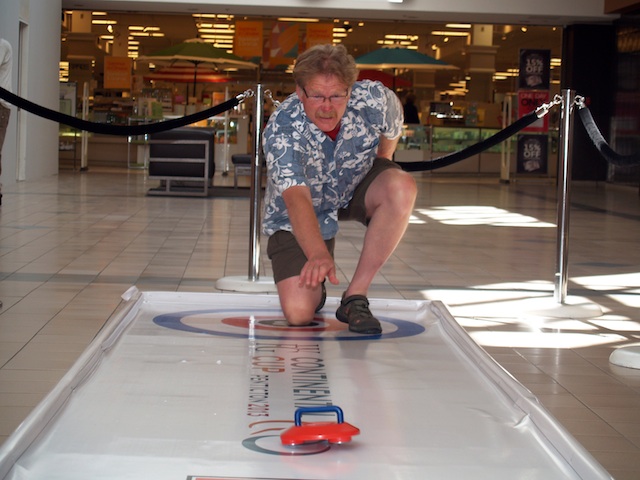 The Host Committee partnered with Cherry Lane Shopping Centre to present the unique contest that gives entrants the chance to win some great prizes just in time for Father’s Day.  The playoffs will be underway Friday, June 15 and Saturday, June 16 to decide the winners. “The teams have been having a lot of fun trying their hand at the mall-version of the grand old game,” said Host Committee Chair Kim Kirkham.  “Our volunteers have been on hand to help out and distribute information on the event.  It’s an excellent way to promote one of the most exciting championships in the curling world, coming to the Okanagan next January.” The World Financial Group Continental Cup will take place January 10-13 in the South Okanagan Events Centre showcasing some of the greatest names in the game.  Team North America will face Team World for the ninth time, with both sides currently sitting at four championship titles apiece. The volunteers have a busy schedule planned for the rest of the month, starting with the first Volunteer Rally June 19 from 6-8 pm at the Penticton Curling Club where they’ll be fitted for official uniforms, have accreditation photos taken and pay their registration fee.  It’s also the opportunity to meet their Directors and fellow volunteers. On June 23 the promotions team will be on-site at the 11th annual Penticton Elvis Festival that attracts 5,000 fans to the region each year.  Dozens of tribute artists will perform at outdoor stages set up around beautiful Lake Okanagan to celebrate the life of the “King of Rock and Roll”. Volunteers Navid and Sue Chaudry will host the World Financial Group Continental Cup booth at the Penticton Downtown Community Market June 30 from 7:30 am to 12:30 pm – with the assistance of Ken Carlson in setting up the booth.  Along with distributing a host of promotional materials, they’ll also be taking entries in the draw to win two Full Event passes to the Continental Cup. Representatives of TSN, the World Curling Federation and the Canadian Curling Association visited Penticton the week of June 3rd to meet with the Host Committee, tour the area and view the facilities that will be used for the event. The officials were especially impressed with the South Okanagan Events Centre where the competition will take place and the Penticton Trade & Convention Centre that will host curling’s legendary party in the Patch. “You Gotta Be There” when the 2013 World Financial Group Continental Cup comes to the sunny Okanagan Valley.  Excellent seats are available for the most unique championship in the world just by clicking here.