Penticton’s “Bridge in Wine Country” tournament attracted nearly 1,500 contestants from around the world June 11-17 and World Financial Group Continental Cup volunteers were there to encourage them to come back to the Okanagan Valley for one of the most exciting events in international curling. Daily winners in the bridge tournament were awarded passes to the 2013 World Financial Group Continental Cup, hitting the ice January 10-13 in the South Okanagan Events Centre. That means Ron Anderson, Donna Dunn, Wayne Steward, Joy Berry, Dave Carlson and Don Sache have guaranteed seats. 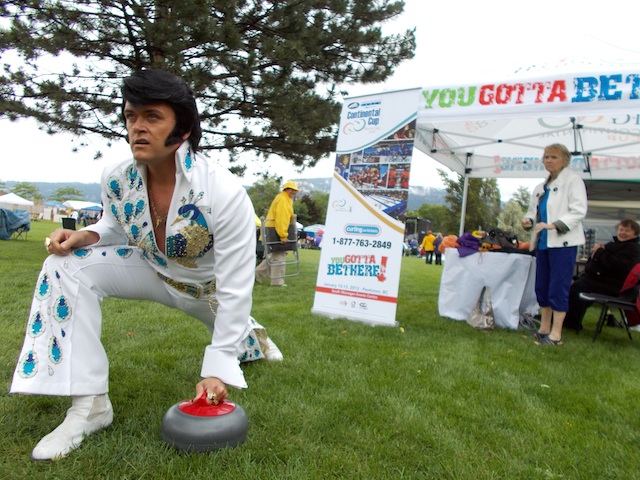 The bridge bunch will be joined in the stands by members of the Pat Lothe family – thanks to the “Rockin’ with Dad” competition that ran June 10-17 in Cherry Lane Mall. The Father’s Day promotion brought local families together to take their best shots at a prime seat for the Continental Cup in the mall-scale version of the roaring game. “It’s great to see our volunteers out in the community taking part in so many different activities,” said Host Committee Chair Kim Kirkham.  “It doesn’t have to be a sporting event… what so many people don’t understand is there are so many entertainment opportunities that accompany the championship itself.” The first Volunteer Rally provided the chance for everyone to get on the same page in the drive to make the 2013 World Financial Group Continental Cup the best ever.  A total of 119 dedicated supporters came out to the Penticton Curling Club on June 19 to take care of all the behind-the-scenes details that are part of serving as a volunteer for a major curling championship. “Even in the preliminary stages, we have so many volunteers that are stepping up,” noted Kirkham.  “Stacey Jones and her team were instrumental in making sure our first orientation session came off without a flaw… and that’s exactly what we can expect when the event gets underway in January.” The Host Committee also extends thanks to Marge Sluchinski, Ken & Gene Ferg, Ellen Hiback, Terry & Vic Ring, Donny Jones, Mary Lukey and Sue Tomicic for their hard work during the rally. The promotions team was back on the job Saturday, June 23 to greet the large crowds attending the 11th annual Penticton Elvis Festival where dozens of artists paid tribute to the “King of Rock and Roll” on the outdoor stages surrounding Lake Okanagan. “You Gotta Be There” for the 2013 World Financial Group Continental Cup when Team North America takes on Team World in this classic international showdown.  Full Event passes are available now by clicking here.