In Curling, You Gotta Have Heart!

Imagine a national championship where the athletes fire up a cigarette during the heat of competition.  It may be hard to believe today, but that was indeed the case in curling until the 1980s. In the modern era of the game, all that has changed with fitness and conditioning becoming essential components to success at the upper echelons of the sport.  And that’s one of the main reasons the 2013 Ford World Men’s Curling Championship has partnered with the Uplands Golf Club Heart Tournament July 25, 28 and 29 to support cardiac care at Victoria’s Royal Jubilee Hospital. “This is Vancouver Island’s longest running charity event and the curling community has always taken a strong involvement… golf is a great way for curlers to stay active during the summer months,” notes Keith Dagg, Co-Host Chair of the Ford World Men’s that will be hosted by Victoria’s Save-On-Foods Memorial Centre.  “It’s an ideal setting to promote the event and the fact that fitness and athleticism have become so important to our sport.” The women’s tournament takes place on the Wednesday, with the juniors playing Saturday before the men take over the course the following day. The Host Committee has contributed two “Old Classic” full event passes to all the action at the world championship that will go up for bids at the men’s live auction, a “Double Impact Opener” pass for the women’s tournament, and they will also serve as a hole sponsor at the Uplands Golf Club all three days. 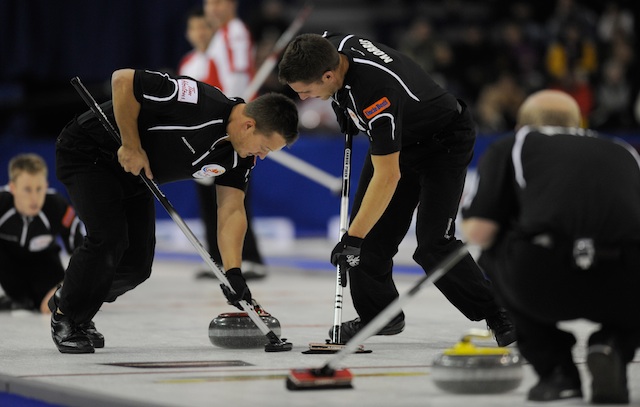 While Marc Kennedy (far left) watches, and Kevin Martin (far right) calls the line, John Morris (r) and Ben Hebert (l) give it all they've got at the 2009 Tim Hortons Roar of the Rings (Photo Michael Burns)

Neil Houston, Event Manager for the 2013 Ford World Men’s – and a Brier and World champion in his own right throwing second stones for Alberta’s Ed Lukowich in 1986  – is quick to dispel the stereotype of curling as a leisurely sport.  “I played at the competitive level back in the days of the corn brooms… and I used to lose about seven pounds a game.” John Morris, third for Kevin Martin’s 2010 Olympic gold medal-winning team, focused on the subject of conditioning in his book Fit to Curl, the first sport-specific training guide to help curlers improve their game and health. In a 2012 Canadian Curling Association article – Fit For Curling: No room for flab in today’s game – Glenn Howard, title-holder of last season’s Tim Hortons Brier and Capital One World Men’s Curling Championship weighed in on the new state of curling. “It’s not an old-man, beer-drinking sport now,” said Howard, a 50-year-old veteran who still plays at the top of his game.  “Fitness is the key … we sort of got away with (lack of training) in the past, but now you can’t get away with it any more.” The focus on fitness is attributed to curling’s designation as a full-medal sport in the 1998 Winter Olympics in Nagano, Japan, according to Warren Hansen, Director of Event Management and Media Relations for the Canadian Curling Association.  “Curling being part of the Olympics was a major contributing factor towards a whole different attitude about how they prepared mentally and physically,” stated Hansen. “You Gotta Be There” when the finest athletes on the pebbled-ice surface compete in the 2013 Ford World Men’s Curling Championship, March 30-April 7 in the Save-On-Foods Memorial Centre.  Full event passes are available now by clicking here. (Fit For Curling: No room for flab in today’s game  by Dave Komosky was published on Curling.ca on February 10, 2012)