Anyone who thinks a curling club isn’t an important and respected part of its community should take a look at the three hard-working clubs whose efforts resulted in two $25,000 grants and stops on TSN’s Kraft Celebration Tour. Of the three clubs that made the top twenty community sports facilities in TSN’s annual head-to-head competition, two scored big when the final results of voting were announced last week, and the third showed why curlers are the best sports ever. In Chicoutimi, supporters of the Club de Curling Chicoutimi out-voted the competition (local trail association Plein Air St. Adèle) to secure the $25,000 grant and a home-grown broadcast of TSN/RDS’s SportsCentre. 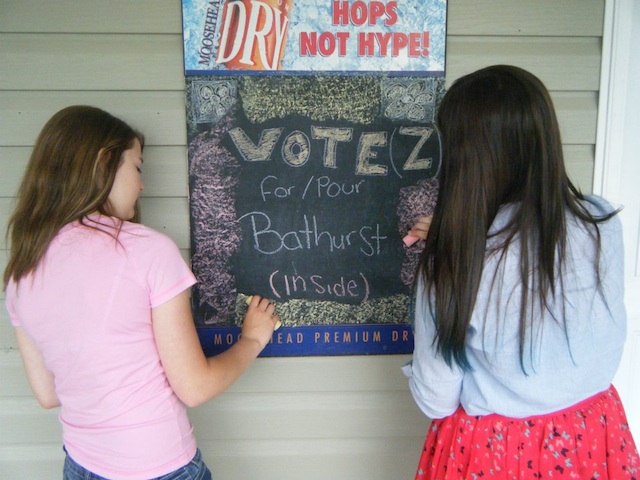 Volunteers in Bathurst, NB, appeal to voters on their way to winning TSN's Kraft Celebration Tour for their community.(Photo Toni Mullin)

Next door in New Brunswick, supporters of the Bathurst Curling Club (competing against the Sussex Tennis Association Tennis Courts) sat “with bated breath” as the results were announced, reports Bathurst’s Mark Mullin. “The excitementanxiety level was high. Many more were watching at home who quickly started to pour into the club after the announcement. Many hugs and high fives were shared as we tried to convince ourselves that all the work of the previous days had been successful.” The $25,000 grant will come in very handy, says Mullin, citing a failed cooling plant that threatened to shut down the club last season. Past president Peter Assaff and his daughter Allison, a junior curler who came up through the club’s Little Rocks program, put Bathurst CC’s nomination together. Once the club had made it into the top twenty, executive members Mark Guindon and Patrick Noel, as well as the rest of the club executive, membership and Bathurst community joined the fray. “We were humbled by the number of people who supported us in this effort,” says Mullin. “For a city of 13,000 to cast 291,000 votes has left us speechless. Atlantic Super Store, Staples, Xstrata, our local radio and newspapers, along with dozens of other businesses banded together with the citizens to make this a reality. The cash prize of course is wonderful for the curling club, but the unity of the community in something so positive, and the benefits that are bound to follow with the Tour is worth even more.” Over in Northern Ontario, the Kakabeca Falls Curling Club gave it their best shot, coming up short against a worthy opponent in New Liskeard’s Carter Antila Memorial Skatepark. “It was a couple of hectic weeks,” says club president Peter Kuzyk. “I knew we were in tough as soon as I read New Liskeard’s story. I’m extremely proud of the job our club and community did.  This was a great way to highlight our club as we enter our 60th season.” Kuzyk also had something to say about the community that extends beyond municipal or provincial borders. “I’m proud of the joint effort we had between Bathurst, Chicoutimi and Kakabeka.  It was great to see the three clubs supporting each other and, as the song says, two out of three ain’t bad!” Curlers across Canada will be able to see the winning clubs and their communities in action during a live broadcast of SportsCentre on TSN from Bathurst on August 24, and from Chicoutimi on August 22. As for Kakabeca Falls, the last word goes to Kuzyk, who summed it all up in true curling fashion: “The nice thing about coming in second is they have to buy the drinks – right?”